This Thursday, 22 May, Hammersmith & Fulham residents will elect a new Council and London members of the European Parliament.

Readers of my E-news will know my opposition to H&F Conservative Council’s housing policies, their support for demolishing Charing Cross Hospital and closing both borough A&Es, and their willingness to climb into bed with any luxury developer or property speculator. 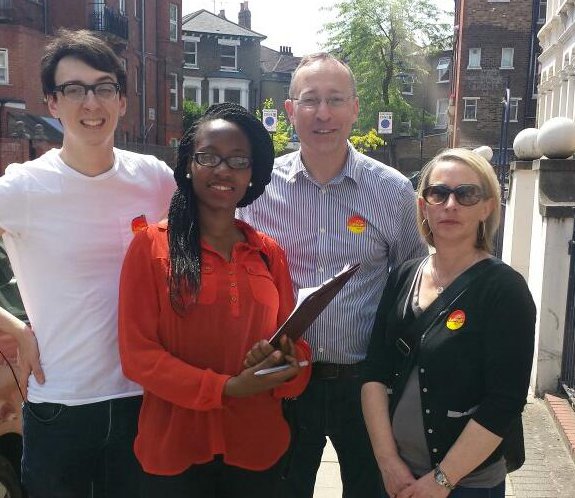 Until last week the Conservatives were complacent about keeping control. Average property prices of £750,000 they thought meant only very wealthy people could now afford to live here.  To make sure the Council has pursued the same gerrymandering policies as Westminster did in the 1980s, moving hundreds of poorer families out, demolishing and selling affordable homes.  They have spent millions in taxpayers’ money on propaganda and subsidised their remaining services from the £19million profit they make entrapping drivers on cctv.

But now it appears all this may not be enough.  Former Tory voters in the marginal wards in north Fulham and south Hammersmith are angry enough, especially over the proposed demolition of Charing Cross and closures of emergency services, to vote them out. And the alliances Labour has built with Green and Lib Dem supporters over issue like the closure of Sulivan school and the destruction of the Earl’s Court/West Ken area will hopefully be translated into votes for Labour candidates.  It is only labour that has any chance of winning seats from the Tories here.

Panic set into the Tory ranks when they saw that the national press was reporting that the outcome of the election is too close to call, and they realised they might lose. The Prime Minister was asked to stop off and endorse their campaign in a visit that badly backfired.  Cameron sat in the Tory office, posed uneasily for photos and failed to meet a single resident. He was badly briefed, undermining the Tory messages by endorsing airport expansion and supporting the demolition of Charing Cross, but he also gave false information about the future of the A&E there.  I have written to him today to correct this and ask him to acknowledge that there will be no consultant-led emergency services left on the Charing Cross site.

If you are still making up your mind, here are five questions to consider before you vote on Thursday.

1.    Which party will stand up for our hospitals and fight to protect Charing Cross?

Re-organisation of the NHS is leading to damaging changes in healthcare in Hammersmith & Fulham. Our borough’s population is rising and demand is increasing. Yet, under the planned changes, backed by David Cameron, Jeremy Hunt and the local Conservative Party, access to local emergency care will be drastically reduced. I, and my fellow Labour Party members, have worked closely with the independent Save Our Hospitals group and together we want a council that protects our world-class hospitals, rather than closing both A&Es, and demolishing Charing Cross. A Labour Council will make sure planning policies prioritise essential public services over luxury high-rise flats.

2.    Who will put residents first, not overseas investors or property developers?

I’ve met with families with children who live in cramped 1-bedroom flats with mould on the wall and vermin in the kitchen, yet the Council claims they’re ‘adequately housed’. I’ve been contacted by families with young babies who were placed by the Council in foul hostels alongside dangerous and unstable individuals. Local residents often turn to Hammersmith & Fulham Council for help when faced with a housing problem, but instead of pursuing policies that help local residents in housing need, the Tory Council is pursuing policies that actively contribute to the housing crisis in the Borough, selling and demolishing hundreds of council homes.  A Labour Council will both stop the fire sale and insist developers build sustainably and in keeping with the area,  including affordable homes in their planning applications

3.    Which party is backing small-business and a strong local economy?

Since I was elected as Hammersmith’s MP, I have always tried to support and promote small businesses. But from Shepherds Bush Market to West Ken they are struggling against unfair competition. Rents are being pushed up by the big developers.  Betting shops, pawnbrokers and payday lenders are replacing local shops, pubs and family businesses on our high streets.   The Tories are on the side of the chains and developers as always. A Labour Council will stand up for small businesses.

Under the current Conservative administration we have seen fines for moving traffic offences increase 18-fold in six years. This just simply is not fair on drivers to use them as a cash cow like this. This is only one of the many stealth taxes the Tories have imposed, but in many cases traps are set up by poorly marked signs, over-zealous enforcement or putting cameras in simply to raise funds.  Labour will stop the entrapment of drivers in this way.

5.    Which party will tackle crime and anti-social behaviour?

One of the most successful policies implemented by former Mayor, Ken Livingstone, was the introduction of Police Safer Neighbourhood Teams for each ward in London. It’s extremely concerning then to see that these teams are being cut across London. In Hammersmith the teams of 6 officers are being reduced to only 2 officers assigned to each ward. There are 158 fewer police and community support officers in H&F now compared to the last Council election.  Labour is committeded to neighbourhood policing.