I discovered today that the final decision on the future of Charing Cross, Hammersmith and St Mary’s Hospitals -; the three major hospitals run by Imperial Healthcare Trust -; which was due to be made next Wednesday 28 May has been further postponed until 30 July at the earliest.

This means the announcement on the future of our borough’s two hospitals has now been delayed for almost a year.
The reason is not a re-think about the closure of both A&Es and demolition of Charing Cross but another financial crisis.
Amid major changes to the management at Imperial, the money is simply not there to fund ‘integrated care’ and the switch from acute to primary care services.  The promise to improve GP and other community services before any cuts are made to accident and emergency cannot at present be met.

However, there is no reprieve for the emergency services already marked for closure.  Imperial and the local NHS -; and of course the Coalition Government and Conservative Party in H&F – are continuing to support the closure of Hammersmith’s A&E this year and the demolition of Charing Cross with the loss of all consultant emergency services.

In the words of Medical Director, Dr Mark Spencer “Ealing and Charing Cross would be designated local hospitals and would provide a GP led service.  They would not take blue light patients.”.  His comments were recorded at the health scrutiny committee for NW London, chaired by Hammersmith Tory Councillor Lucy Ivimy.

The worsening crisis in our local hospitals makes David Cameron’s wholly false statement about Charing Cross appear even more cynical.  Below is the letter I wrote challenging him on the false statement he made in Hammersmith last week.

I am not expecting much from the reply. The PM has form for dodging tricky questions – as Labour Leader Stephen Cowan found out in 2010 when the PM last got caught out spreading mistruths about what the Tories were really getting up to here.

In his latest blog Stephen asks “Did David Cameron Mess Up Or Was He Deliberately Trying To Mislead Residents About H&F’s NHS?” 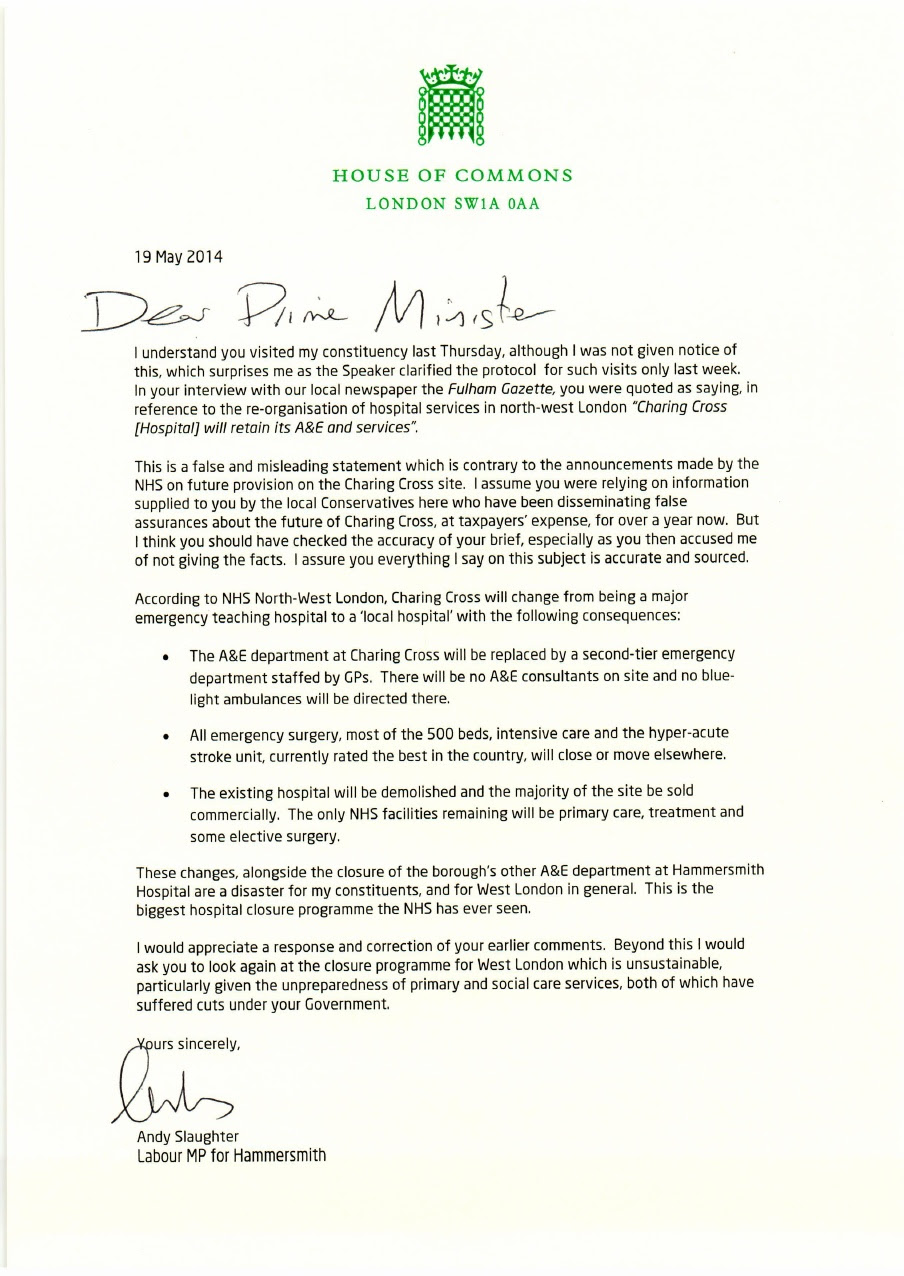 The Tories’ time is up in Hammersmith & Fulham.

They have abused the trust of residents for too long.

2.    Hammersmith and Fulham: why is Sulivan primary school being closed?

4.    The great Hammersmith and Fulham council house sell off

Vote Labour this Thursday May the 22nd

You can read about Labour’s great 2014 team and our individual councillors and candidates on Labour Leader Stephen Cowan’s blog.