Grassroots sport in Hammersmith has received a significant boost following the opening of refurbished tennis courts by Andy Slaughter MP at a local park. 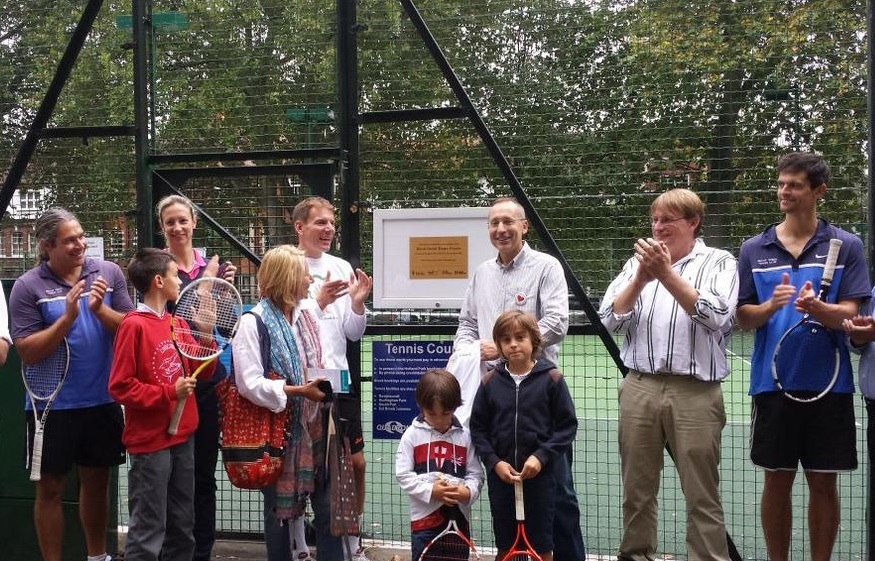 The improved courts at Brook Green are a result of a £50,000 grant from City Hall. The improvements were managed by the Football Foundation, the country’s largest sports charity.

The funding has allowed the Friends of Brook Green, a volunteer-led community group who aim to protect and enhance Brook Green, to resurface and reconfigure their tennis courts which now comprise three full-size and two mini-courts. New floodlights have also been installed and improvements have been made to the drainage system at the site to combat tree root damage and poor lighting that had previously restricted levels of participation.

Friends of Brook Green will work with local schools, including primary and special educational needs schools, to offer opportunities to pupils to get involved and participate in tennis. The refurbished facilities will allow teams to participate in the LTA Middlesex League and enable Brook Green to offer individual and group coaching sessions to people of all standards.

An additional £50,000 came from Sport England’s Inspired Facilities Fund. To date the fund has helped more than 1,600 local sports projects across the country. Friends of Brook Green also provided £70,000 towards the new facility.

Since it was launched in 2000, the Football Foundation has awarded around 13,000 grants worth more than £500m towards improving grassroots sport, which it has used to attract additional partnership funding of over £700m -; over £1.2bn of investment into the grassroots game.

Andy Slaughter, MP for Hammersmith, commented: “It was a privilege to open the impressive new tennis facilities at Brook Green. Recreational sites such as these are vital in improving the health and well-being of communities across London and providing young people with a chance to get involved in sport. I’d like to congratulate Friends of Brook Green for their excellent work and thank the Mayor of London’s Sports Facilities Fund for their considerable investment into Hammersmith.”

Jason Eker, Director of the Friends of Brook Green, said: “The grant we have received from the Mayor of London Sports Facilities Fund has allowed us to refurbish this facility and provide tennis to the community at an affordable rate for years to come. The addition of a Pavilion next year will also add a kiosk, tennis office and toilets for the users.”