Over a third of people in Europe seriously affected by aircraft noise live in the vicinity of Heathrow.

This includes thousands in the Hammersmith area, particularly those in the south of my constituency

I am a long-term campaigner against further expansion of Heathrow Airport, while supporting the retention and improvement of the existing two-runway airport.  This includes my time as leader and deputy leader of the London Borough of Hammersmith & Fulham (1991-2005) and as MP for Ealing, Acton & Shepherds Bush (2005-2010) and Hammersmith (2010-present).

In 2009 I resigned from my position in Government to be able to campaign more effectively against the planned third runway.

Although clearly not an appropriate site for a major international airport, Heathrow has grown dramatically since the second world war to become one of the world’s leading airports and in the process has become a major employer and driver of the economy in west London.  For that reason it has a love-hate relationship with many west London residents.

However, in the past 20 years the operators of Heathrow supported by some major airlines have used every method possible to promote unlimited expansion of the airport through new terminals and runways.

Yet, the impact of further expansion on the environment of west London and the health and welfare of its two million residents would be catastrophic.

I welcomed that the proposal for a third runway was taken off the table after the 2010 election, though this proved to be short-lived.

I respect the detailed work the Commission has undertaken on the options for runway expansion but I am of the view that the Commission itself, and in particular the ridiculously long timescale it has been set to complete its work, is a political device to square the promise given by the Prime Minister before the 2010 election (‘no ifs, no buts, no third runway’) with the powerful forces in the Conservative Party which would like to see Heathrow expansion.

Sadly, this devalues the work of the Commission.

There is little to distinguish the two Heathrow options.  The Heathrow Hub is slightly less detrimental to London residents in terms of noise and other forms of pollution, but shares the basic objection to any Heathrow expansion option: that it will cause intolerable additional pressure on London’s air quality, road and rail network, and above all on residents under the flight path affected by noise.

I am not an advocate or supporter of the Gatwick option save that in every respect it is far less damaging than either of the Heathrow options, and that it would establish a framework of air travel which seems better suited to a city and region of London’s size.  The model of a five airport city with all but Heathrow capable of expansion within existing capacities, and with Gatwick able to provide a two-runway alternative seems sensible in commercial and logistical terms.

The work already done by the Commission debunks the myth of the hub airport, which already seems outdated.  The growth in point to point and budget airlines services suggest a changing market better suited to two major rather than one mega airport for London. 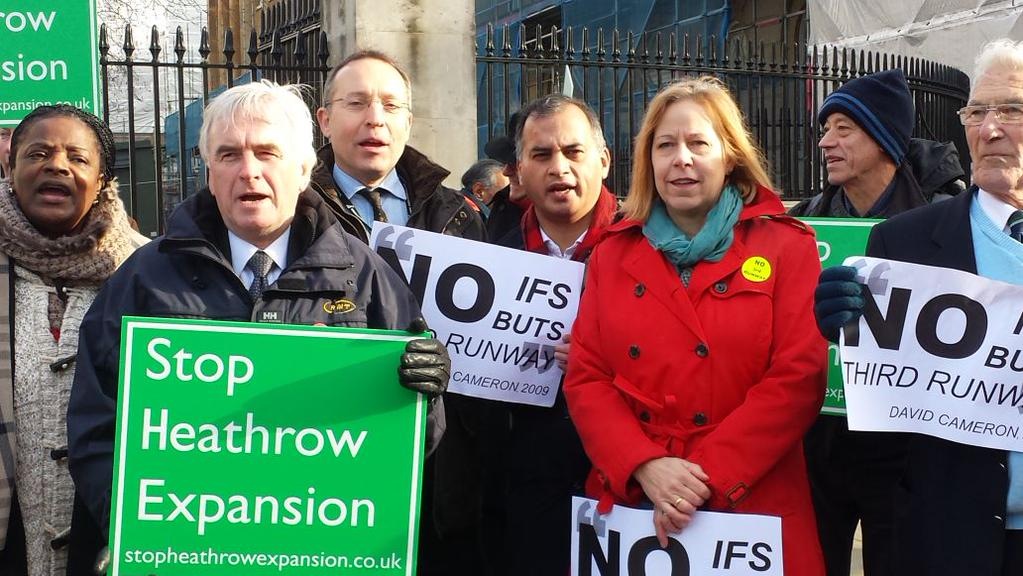 Any new capacity must go hand in hand with efforts to reduce CO2 emissions from aviation to tackle the industry’s contribution to climate change. As the Commission now looks in greater detail at specific proposals it remains crucial that they take into account the need to minimise local and environmental impacts of increased capacity.

On noise pollution, I urge the Commission to ensure that assessment of noise is made using the 50Laeq metric in line with the World Health Organisation’s belief that this is the appropriate level that  ‘moderate’ community annoyance starts to kick in.

This is also in line with one of the recommendations of the recent report by the All Party Parliamentary Group on Heathrow and the Wider Economy of which I am a member.

I urge the Commission to encourage more scrutiny of the Heathrow proposals particularly relating to pre-6am flights. The Commission could investigate what effect a third runway at Heathrow would provide on night flights as a whole.

The Heathrow proposals will undoubtedly leave some residents with little respite, especially the area under the last few miles of the landing flight path and the closest to the airport.

More works should be done to ensure that these areas receive acceptable mitigation packages should such a proposal go forward. Clearly this should also apply to households between any new and old runways.

Finally, I am concerned that Heathrow Airport’s offer to buy out the several thousand properties needed to make way for the third runway would force many people to move out of homes they have lived in for decades.

Read more about the consultation here.