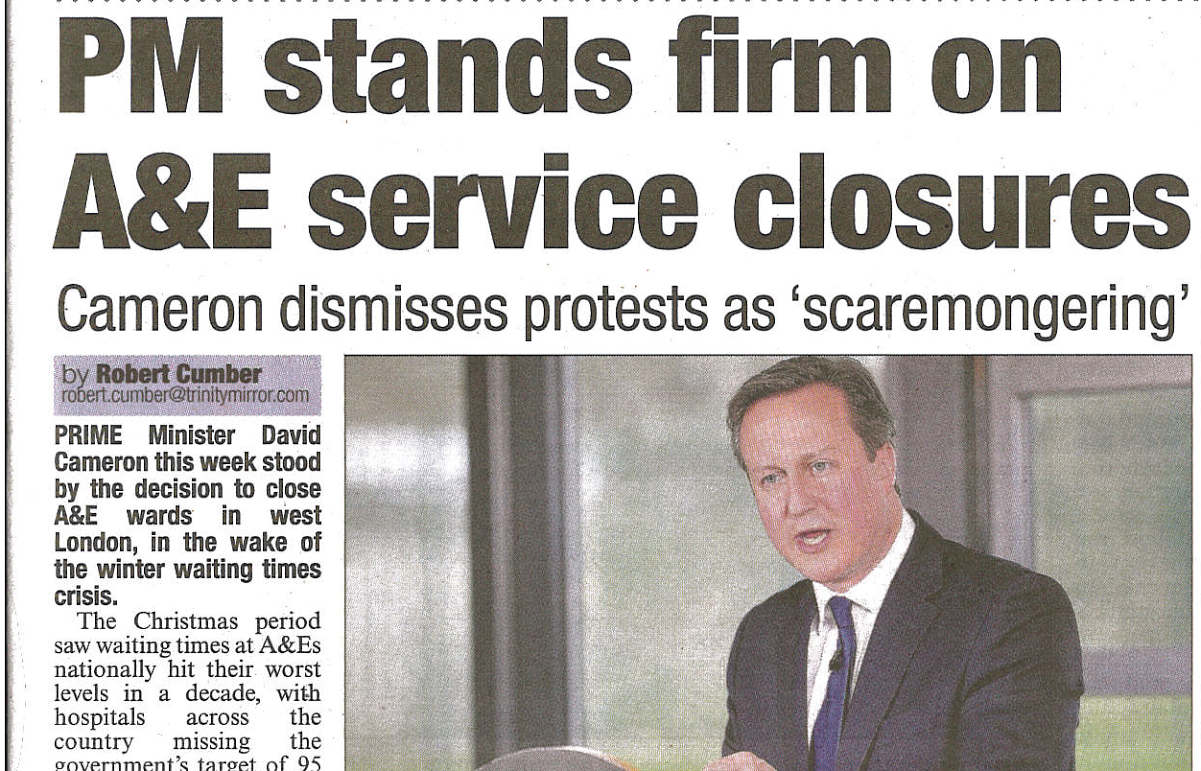 Speaking in west London last week David Cameron finally came clean after months of evasion and confirmed that a future Conservative Government would press on with the service closures and redevelopment of Charing Cross and Ealing Hospitals.

Despite the increased pressures caused by the closures at Hammersmith and Central Middlesex last September he refused to abandon the ‘Shaping a Healthier Future’ programme.  But, knowing that the plans for demolition and loss of blue light A&E are universally unpopular, reports explaining the Government’s position are unlikely to be published before the General Election.

Both the Keogh Report into the future of A&E departments, which is said to recommend closing or downgrading half the A&Es in England, and the NHS England inquiry into the effect of A&E closures so far in west London are months late. 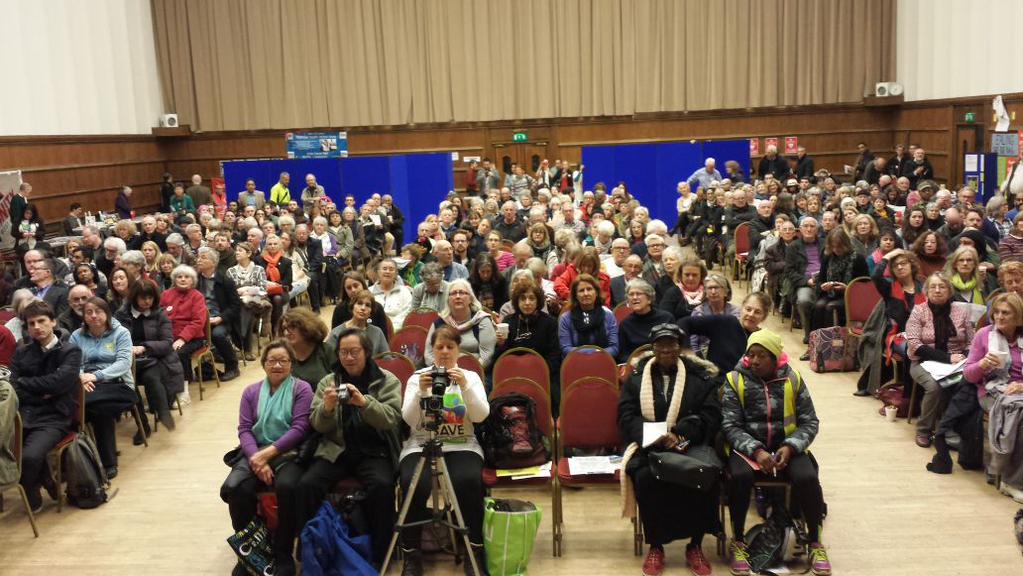 Cameron’s confession came too late for the Defend London’s NHS rally in Hammersmith Town Hall, but the message from the 600 people in attendance was clear.  Ours is a community that will continue to fight for its NHS. The meeting heard speeches from local doctors, journalist and campaigner Owen Jones and me.

The turnout and mood showed once again that the future of the NHS remains the most important General Election issue in Hammersmith.

Meanwhile, on Saturday I attended the first hearing of the Independent Healthcare Commission chaired by Michael Mansfield QC.  You can read my evidence here.

West Ken tenants determined to save their homes 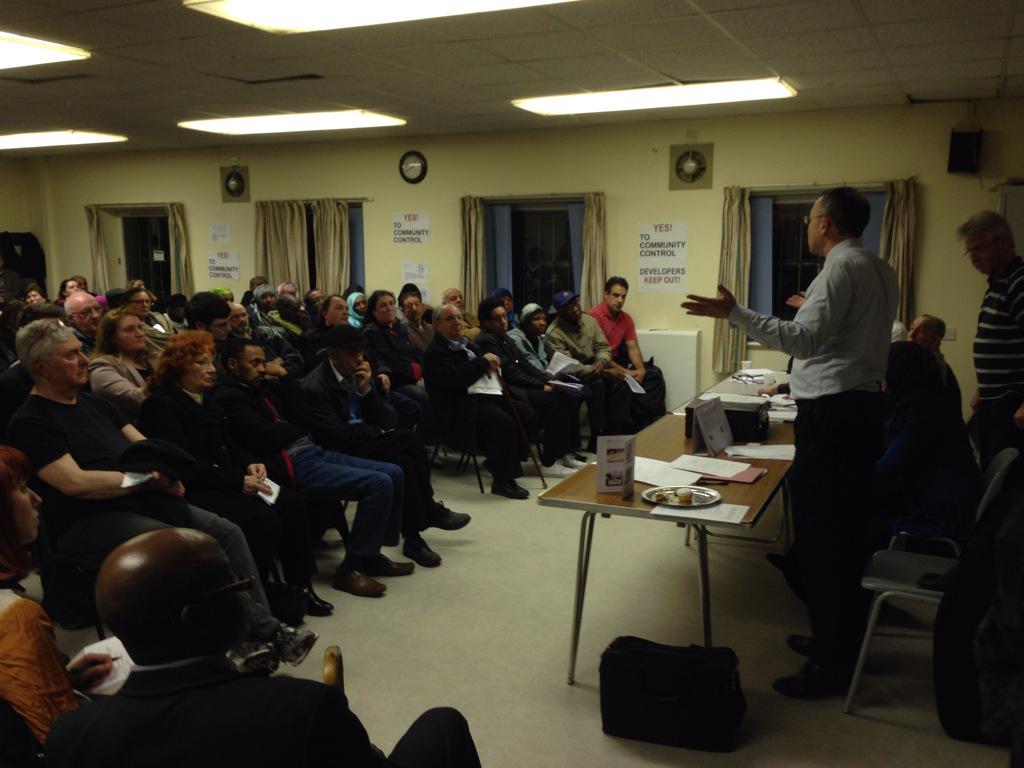 On Tuesday I spoke to 150 residents of the West Kensington and Gibbs Green Estates on the latest moves to stop 750 affordable homes being bulldozed by developers Capco.

The Conservatives did a deal with Capco to sell the estates for a fraction of their value and allow thousands of luxury investment flats to be built on the site.  Now the Labour Council is negotiating to save the homes.

There was a warm reception for local Labour councillors Larry Culhane and Ben Coleman, whose victories last May saw the Council change hands.  Residents voted overwhelmingly to take control of the land themselves and preserve it for local families and those on low and average incomes. 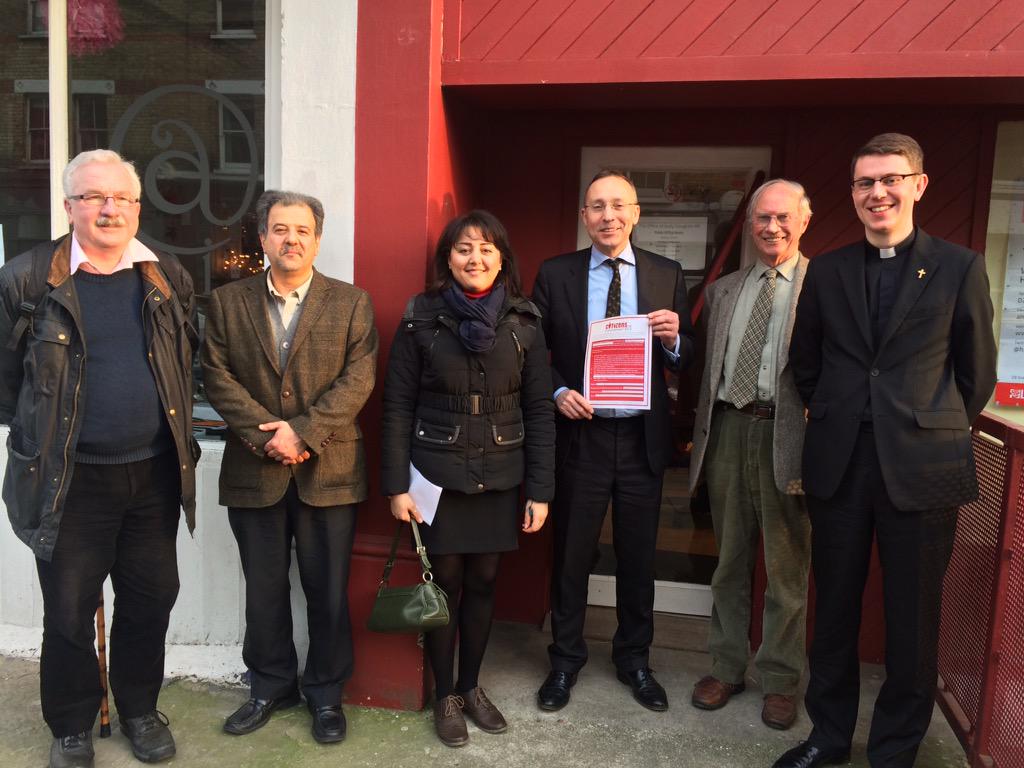 Last Friday I met with representatives of West London Citizens, part of Citizens UK, which brings together community groups to work for the common good.

Last Friday I spoke at the first hustings of this election, hosted by the West London Palestine Solidarity Campaign.  Despite the no show by the Conservative candidate, there was a lively two-hour debate and a consensus that the international community must step in to recognise Palestine and put pressure on Israel to end its Occupation.

This became more urgent when the right-wing won power again in Israeli elections this week, and appeared to reject a two-state solution, an issue I raised in the Commons.

On the campaign trail 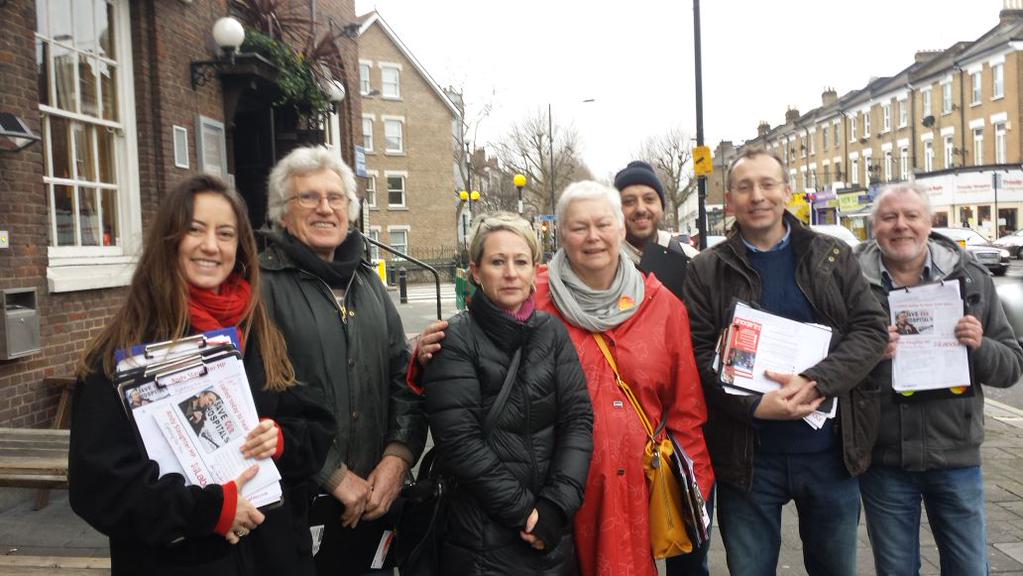 Each weekend I am out door knocking in Hammersmith and Shepherds Bush helped by councillors and volunteers.

I will never get to speak to everyone, but I would like to know what issues matter most to you. So please take a moment to identify the issues that you care about and let me know how I am doing by answering three simple questions.

I was very proud to support the Bill that commits the UK to spend 0.7% of our national income on overseas aid every year. Thanks to the hundreds of constituents who have written in to me about this. 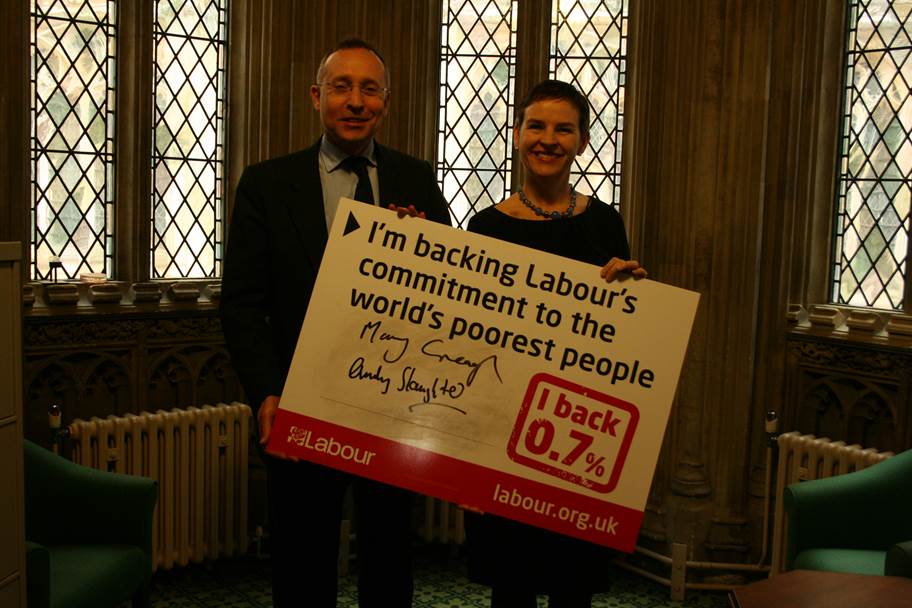 Shaker Aamer is Britain’s last detainee at Guantanamo Bay.  On Tuesday MPs debated his continued detention. You can read my speech in the debate here where I argue that there can be no justification for him to be held for such a long time without charge.

We had a last opportunity to stop landlords and companies like Airbnb turning whole blocks of flats in hotels, renting them out by the day or the week. The Deregulation Bill will relax restriction on short-term lets in London pushing up rents, taking flats out of residential use and causing a rise in anti-social behaviour for the remaining residents. You can read my speech in the debate here.

Cancer Research UK figures show 500,000 children aged 11-15 today will die of a smoking related disease unless action is taken to tackle smoking rates. I believe the evidence to support standardised packaging is clear. That is why I voted in favour of this important legislation.

Old Oak Common has been designated a Development Corporation by Boris Johnson. He says this is to “ensure it can reap the enormous benefits” of his plans to build a “mini-Manhattan” on the land. You can read my thoughts on that here.

Last week it was announced that he will chair the board and his deputy mayor will be the Vice Chair. Other cronies will fill up the majority of the seats. I want to see redevelopment of the area but with affordable homes and local jobs. This won’t happen under Boris’s plans, so with other London Labour MPs I moved to opposed the legislation setting up the corporation this week.

With fellow London MPs John McDonnell & Jeremy Corbyn I talked out the Transport for London Bill this week. This disgraceful piece of legislation was designed to allow developments like that at Earls Court/West Ken which destroy communities, jobs and homes to allow developers to rake in obscene projects. It would have allowed TfL to go into secret deals with offshore tax avoiding companies. A terrible deal for
the tax- and fare-paying public. You can read the debate here. 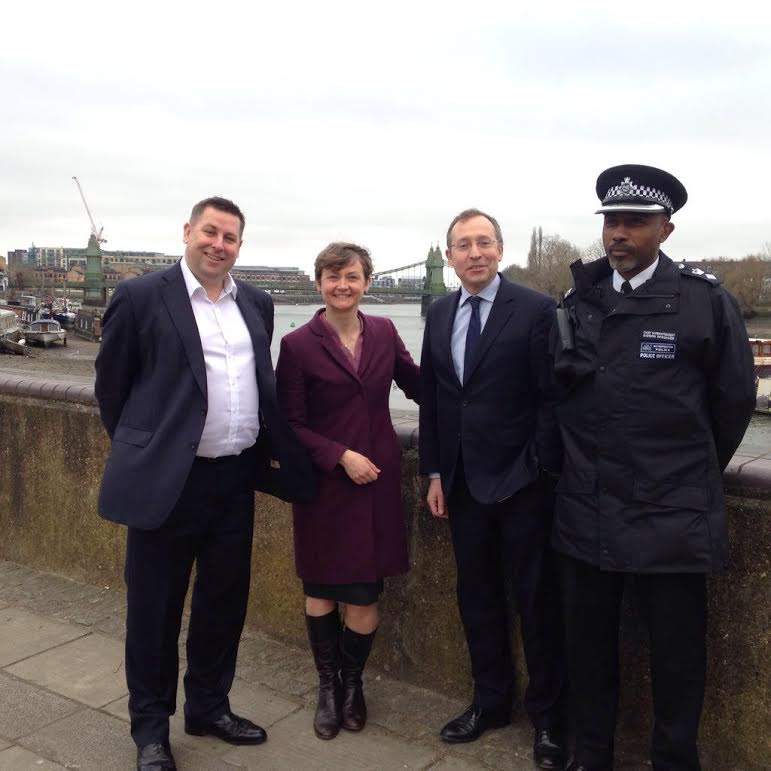 At a public meeting on the Queen Caroline Estate residents expressed concern about the loss of Safer Neighbourhood police teams, but were pleased the Counicl is now paying for 44 PCs to compensate for the cuts introduced by the Government and the Mayor.

Addison Singers.  On Saturday 28 March, the Addison Singers will be performing their Spring concert at St Peter’s Church in Notting Hill. The singers will be joined by two pianists and a whole collection of unusual percussion as they perform a colourful programme of music inspired by Latin America.

Advance tickets are £12 and can be purchased here. The quality and variety of the Addison Singers performance is stunning and I urge everyone to hear them. 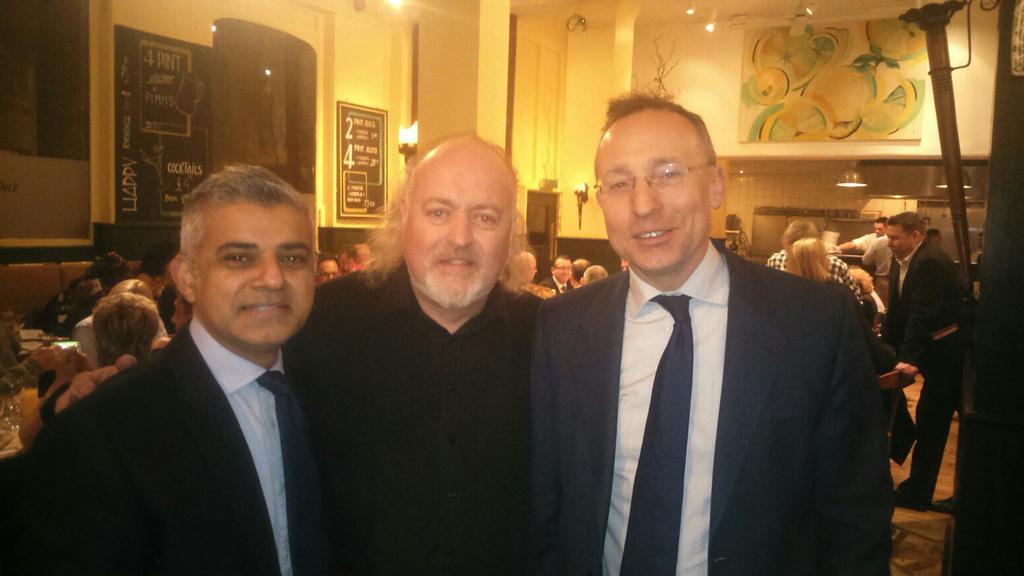 Bill Bailey sings. On Monday, I hosted a fundraising evening for my election campaign in Hammersmith Grove. Legendary comedian Bill Bailey was the star guest and made it a great night’s entertainment.  Bill is a long-time Hammersmith resident and is very supportive of the Save our Hospitals campaign.

Unlike the Conservatives, I depend largely on small donations from individuals.  I would like to thank all those residents who have donated so far.