Those of us who have monitored and resisted Heathrow’s relentless attempts at expansion over the past 30 years will have been disappointed but not surprised when the Davies Commission last week backed a 3rd Runway.  To be sited north-west of the current airport, it would create flight paths directly over central Hammersmith and Shepherds Bush along with other parts of west London currently unaffected by intrusive noise. 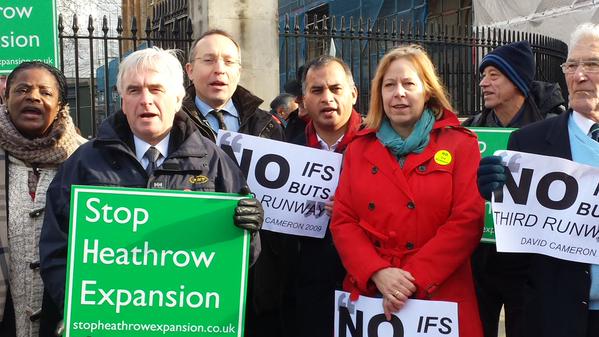 It is difficult to think of another developed country that would countenance expansion of an airport so close to major population centres that it already causes 28% of all severe aircraft noise nuisance in Europe -; affecting 20 times as many people as Gatwick would with a 2nd runway.  Or one that would allow a major increase in air pollution -; linked to one in 12 deaths in London – when Heathrow already breaches EU standards.  Or that would put a heavier burden on the already congested M4 and Piccadilly Line.

But in truth the Davies Commission was set up to approve Heathrow expansion.  Despite taking three years and £20 million to reach a decision, the die was cast from day one.  The draft terms of reference were changed to delete the requirement to ‘examine whether there is a need for additional capacity’.  In other words the brief was where not whether another runway was required.

While marking time to avoid an unpopular decision before the general election, Davies whittled the choice down to three options -; two at Heathrow and one at Gatwick.  But, when choosing between the two airports, Davies put maximum emphasis on the facilities already at and around Heathrow -; logistics companies, airlines, skilled labour.  So the reason for choosing Heathrow was first and foremost because there was a major airport on the site.  Now that’s chutzpah.

At the briefing launching his report Davies spent a long time on the mitigation for west London residents.  Compensation for homes demolished or suddenly yards from the new runway.  A promise of no night flights or 4th runway -; which victims of previous broken promises by the airport are taking with a very large pinch of salt.

I’m afraid I took from this not a new-found concern for west Londoners but an admission that in recommending the 3rd runway the Commission was condemning hundreds of thousands of people to a worse quality of life.  And how can you mitigate a problem that you are creating for the first time?  I know many people who choose to live in Shepherds Bush and Hammersmith because they are away from current flight paths.  Must they now uproot their families and move somewhere quieter?

So, why, given this stitch up, am I still fairly bullish about defeating Heathrow expansion? Not economics or the environment or legal challenge -; though all will play their part from the cost of widening the M25 to the penalties for breaching European law -; but politics.

It was politics that led David Cameron to say in 2009 ‘the 3rd runway will not go ahead. No ifs, no buts.’  He wanted to win marginal seats in west London -; which he did.  Having lost them again in 2015, he is now trying to weasel out by claiming that he was referring to a different scheme (ironically a shorter runway option).

But he now has at least five Cabinet members, the main rival for his job (Boris Jonson) and his favoured candidate for Mayor (Zac Goldsmith) opposed to expansion.  The easier choice for Cameron is to back Gatwick, which costs less, causes far less disruption and gives him a quieter life for his final few years in office -; while still providing many thousands of jobs and, unlike Boris Island, not threatening Heathrow’s future.

The Government’s decision is not expected before October.

Sadiq Khan’s opposition to Heathrow expansion is one reason I am backing him as Labour’s candidate for Mayor.

Meanwhile I had the chance to set out the arguments against expansion on Sky News and BBC’s Sunday Politics.

Today, with thousands of other Londoners, I am taking part in Walk Together, walking the final stop on my regular commute into Westminster to remember the victims of the 7/7 bombing on its tenth anniversary.  With the massacre at Sousse fresh in our minds, it is clear that the threat from violent extremism is just as present today.  We also remember the failed attacks of 21/7, which included the attempt to blow up a tube train at Shepherds Bush station.  Sadiq Khan MP has made this powerful short video about the horror of 7/7 but also the way it brought out the best in our city, cementing our solidarity and tolerance in the face of fanaticism and evil.

Human rights. Despite the decision to delay their legislation repealing the Human Rights Act for a year, the Government’s crude attack on the principles of Magna Carta continues to outrage MPs from all Parties.  Last week I responded to a debate called by a Lib Dem MP, but with support from Labour, SNP and senior Tories.

It must be dawning on Gove and Cameron that they do not have majority to abolish the Act or withdraw from the European Convention in either House.  At the weekend I was one of hundreds of signatories -; including many MPs and lawyers but also some rather better known names – who wrote to President Obama on 4 July to ask him to remember the US’s commitment to human rights and release Shaker Aamer, the last British resident in Guantanamo Bay. 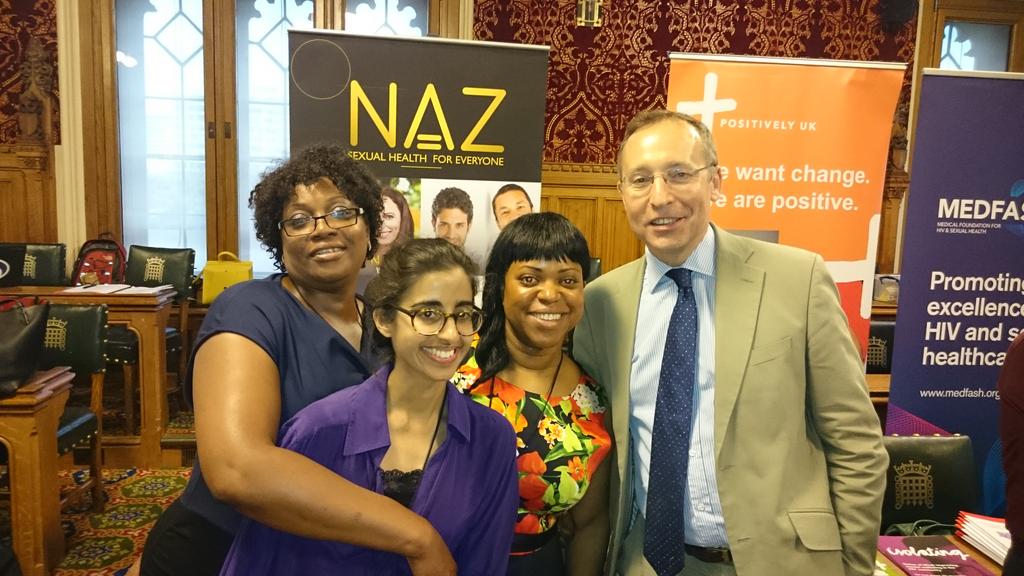 The Hammersmith-based NAZ charity was in Parliament last week to support Halve It -; the campaign to increase diagnosis of HIV and AIDS.  In the UK over 98,400 people live with HIV: 22% of these are undiagnosed and 47% are diagnosed later than necessary. You can read more about the campaign here.

The UK has a worse record on cancer diagnosis than many developed countries, but equally troubling is the postcode lottery which means detection rates vary from place to place and cancer to cancer.  This is certainly true of Ovarian Cancer, and last week I lent my support to the Target Ovarian Cancer campaign. 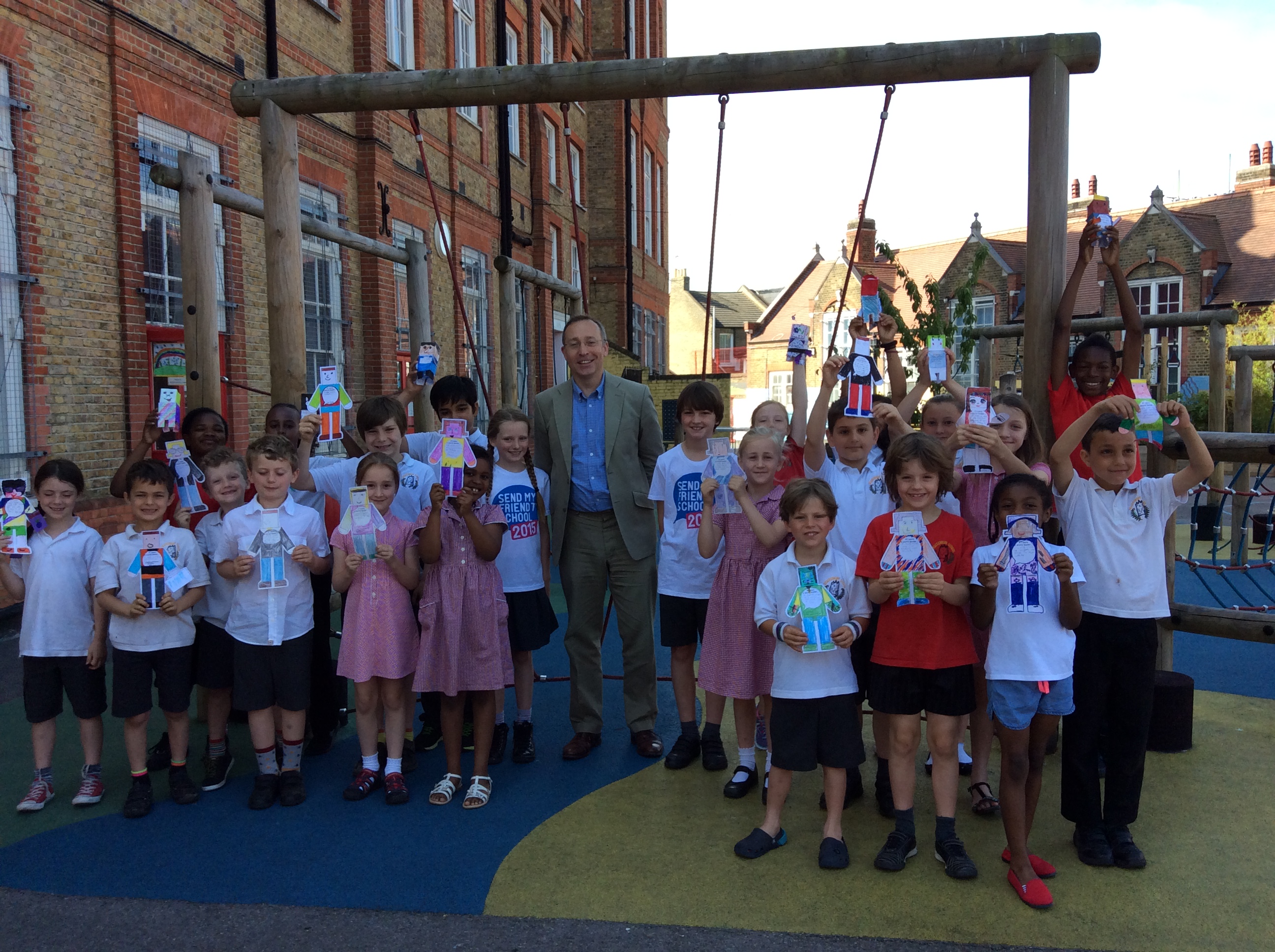 No one can accuse us of being paroch
ial in west London.  Last Friday I visited Brackenbury Primary where the whole school has been involved in the “Send My Friend to School” campaign. 58 million children around the world don’t have the chance to go to school, so pupils in British schools are asked to imagine that they are a world leader and say what decisions they would make to get every child into education. I took away hundreds of the puppets and cut outs with their messages and have promised to deliver them to David Cameron.

The week before I took part in a packed  debate at Rivercourt Methodist Church organised by the H&F Refugee Forum www.hfrf.org.uk to mark Refugee Week.   H&F has a very diverse refugee community and is the base for a number of national migrant organisations. One idea put forward  – which I have taken up with the Council – is that Hammersmith should become a ‘City Of Sanctuary’, a movement which aims to build a culture of hospitality for people granted sanctuary here. I am also meeting representatives of the Syrian community to discuss how we can help that country which currently suffers the worst refugee crisis in the world.

Tomorrow night I am going to see another innovative drama at the Bush Theatre. The Invisible tells the story of how the drastic cuts in Legal Aid have removed justice and hope from so many people whose lives go wrong through no fault of their own -; and of the organisations, like our own law centre, who try to help.

Finally, William Morris Sixth Form says goodbye to Principal Kevin Gilmartin today, after six years in charge and 14 at the school.  I have known Kevin all this time.  He is an outstanding leader who has transformed the life chances of thousands of young people.  An exceptional teacher for an exceptional school.