Junior doctors are the backbone of the NHS.  The term is somewhat misleading as a ‘junior’ means anyone not a consultant and some are in their 30s and 40s with families and mortgages; yet their basic pay is £22,000.

They already work 24/7 to provide emergency cover, but Health Secretary Jeremy Hunt wants routine medical services provided at evenings and weekends, and the only way he can afford this is by paying junior doctors the same rates for unsocial as for normal working hours.

If he gets his way some junior doctors would see their pay fall by 26%.  And yes this is after the ‘11% pay increase’ he told the media but not the doctors themselves about this week. 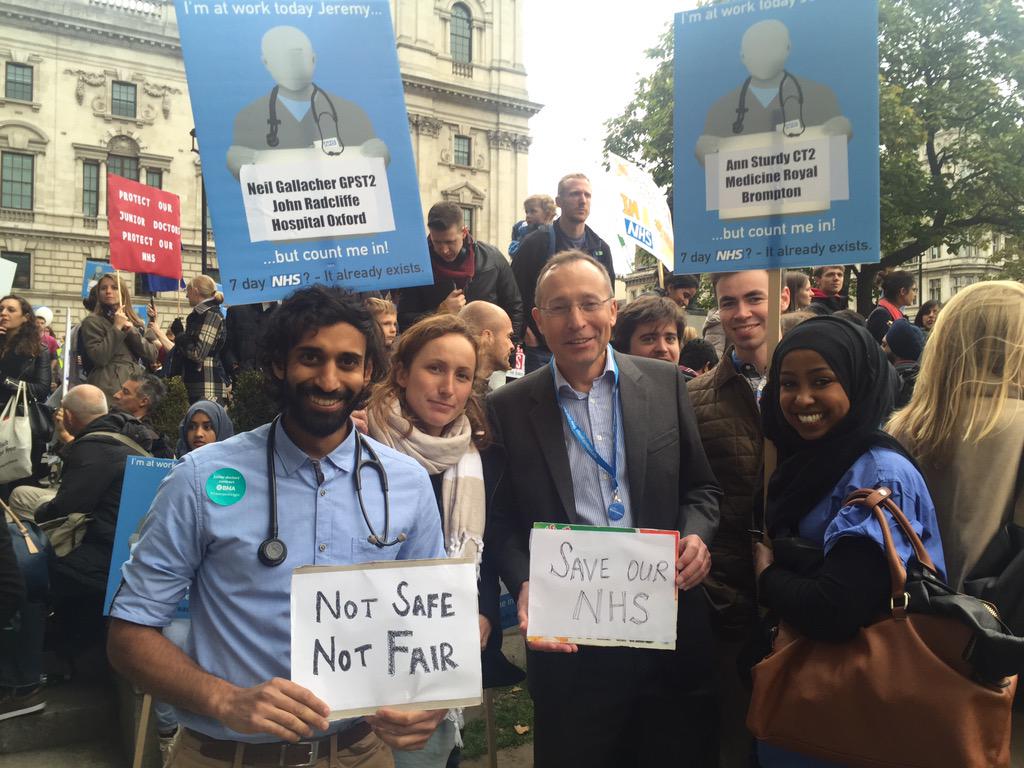 As a result thousands are applying to work abroad especially in Australia and New Zealand.  We will lose them and the skills we have paid for them to learn, and the NHS will be plunged further into crisis.

That is why I joined 20,000 junior doctors demonstrating in London recently and why for the first time they are balloting for industrial action.  It is extraordinary that doctors have been driven to this but, as we know in Hammersmith, Mr Hunt is prepared to do extraordinary things to the NHS.

The latest news on Charing Cross is that the date for demolition is being pushed back as financial and practical problems predictably arise -; now to 2020.

But the Save our Hospitals campaign continues unabated.  We fear that Charing Cross will see its services gradually closed or moved away -; as is happening at the other threatened west London hospital, Ealing -; and that by 2020 there will be little left on the site.

What angers me is the way Hunt uses false statistics to try and get his way.  He claims that there are 11,000 unnecessary deaths every year because hospitals are not staffed properly at weekends. This is his argument for the new 7-day contracts,  but it is just not true.

Separate studies by a Professor of Cardiology in Leeds and a very bright junior doctor in Hammersmith explain why.  There are actually fewer deaths at weekends than during the week.  Fewer people are in hospital on Saturday and Sunday but those who are admitted are often emergencies who cannot wait until Monday and are very sick.

But Hunt’s figures relate to those who then die over the next 30 days -; most of which are fully-staffed weekdays.  As I said above, Hunt is not interested in extra emergency cover (emergency cover is by definition 24/7) but on cheap routine medicine round the clock.

Why? Because this will make hospital care more attractive to private sector providers and specialist care will join primary care as a cash cow for Hunt’s friends in the private healthcare market.

The junior doctors deserve our support.  They are fighting for the survival of the NHS.

The battle to stop a 3rd runway at Heathrow is reaching its terminal phase (sorry).  This week I asked the Environment Secretary whether she was lobbying against it on air quality grounds and if we could still expect a decision before Christmas as Cameron promised in the summer? Of course I didn’t get an answer to either question, but the decision can’t be ducked for much longer.

On the one hand Cameron and Osborne are thought to favour Heathrow over Gatwick despite the noise, congestion, pollution and safety problems being tiny by comparison in rural Sussex.  They have stuffed the Cabinet Committee making the decision with Heathrow supporters.

On the other, for Cameron to go back on his ‘no ifs, no buts, no 3rd runway’ promise would be a betrayal that made Clegg on tuition fees look mild.  And the Tory Party in London would implode in the run up to the Mayoral election next May.

As it is the Mayoral candidates from all the main parties were united at the Rally against the Runway, held opposite Parliament last month.  Thousands of West Londoners turned out.  I spoke alongside Labour’s candidate for Mayor, Sadiq Khan, and Shadow Chancellor John McDonnell. You can see some more picture of the rally here and read coverage from the Guardian here.

The Jeremy Hunt trick of saying black is white is spreading to other parts of Government.  This week we debated the Housing and Planning Bill.  The Government claims it is going to build hundreds of thousands of starter homes for people who can’t afford to buy on the open market.

It gets worse.  If developers offer starter homes they can avoid providing any genuinely affordable homes to rent or buy and local councils won’t be able to insist they do.

Meanwhile, housing associations have been arm twisted into selling off their homes and councils have been told to compensate them for the losses they will incur by doing so -; by selling off the best of their own stock.  In H&F this would eventually mean 6,500 or 50% of council homes in the borough going.

Separately, council tenants with a household income of £40,000 or more will have to pay a market rather than council rent and councils are losing the income they need to build more affordable homes of their own.

Altogether this is a sustained attack on social and affordable housing, especially in London.  It will accelerate homelessness, social cleansing and overcrowding and force people into the hands of slum landlords.  This is more than irresponsible; it is exacerbating an already chronic housing crisis.  You can read my contributions to the debate here.

As well as health, Heathrow and housing I spoke up on a variety of subject in the Commons this week.

On the sale of RBS, on the cruel and illegal trade in dog meat, on proposals to allow the security services to monitor our web browsing, and on tax credits.  I also called for the Government to investigate the circumstances of Shaker Aamer’s 13 year detention in Guantanamo Bay -; the last Briton held there.

I have long campaigned for Shaker’s
release and earlier this year visited Washington with Jeremy Corbyn and senior Tory MPs to lobby the Senate and US Government.  Of course, I was delighted when Shaker was finally flown back to his family in London last week but questions remain for the British as well as US authorities as to how a democracy can lock someone up for years without charge or trial.

If you want to know the issues I am speaking or asking questions on in Parliament,  http://www.theyworkforyou.com/ is a comprehensive guide.

Also this week I spoke in a debate on policing.  Why, I asked, could H&F Council find the money from its heavily-reduced budget to pay for 44 PCs when the Met itself was abolishing neighbourhood policing and Community Support Officers and, in addition to closing Shepherds Bush Police Station to the public, is intending to sell off Fulham Police Station?

I could have added that the Ministry of justice is also planning to close Hammersmith County Court.  You can read my response to this here and local media coverage here.

I have a new and exciting job on the frontbench.  I am still in the shadow justice team but now lead for Labour in the Commons, opposite Michael Gove, and have responsibility for human rights.

The much-advertised repeal of the Human Rights Act (yes, they intend to do that) has yet to materialise, but there is plenty going on.

It took media exposure of the shameful case of 74 year-;old Karl Andree, the British citizen sentenced to 350 lashes, to get the Government to review its contract with Saudi Arabia’s notorious prisons. I used the device of an Urgent Question to force Gove to appear in the Commons, where he announced the cancellation of the contract. But further questions revealed deals with the Saudi justice system are alive and well. 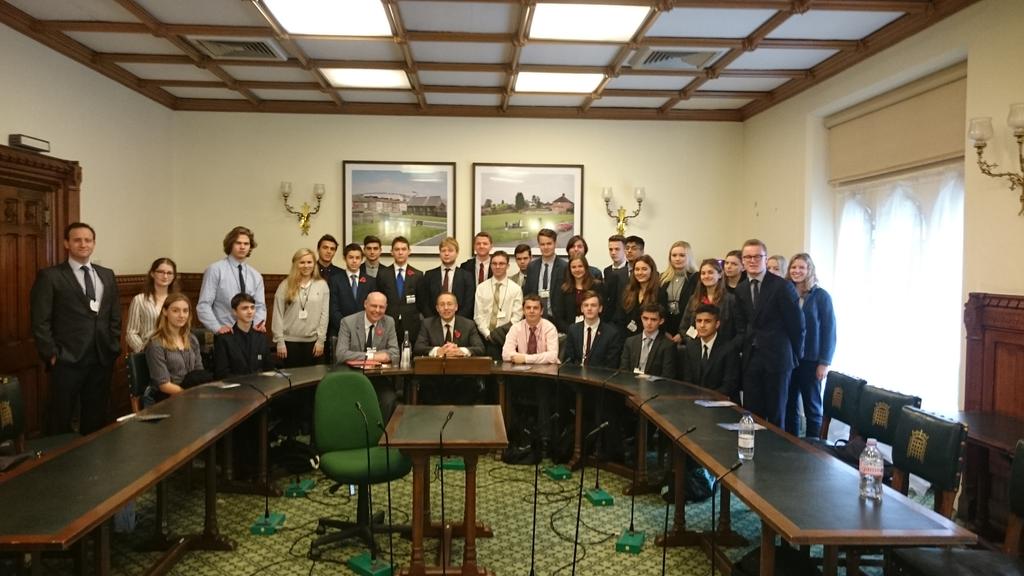 I’m always happy to talk to local schools whether in the Commons as part of a tour or in Hammersmith.  St Paul’s CofE primary invited me in today and asked me questions about my job non-stop for an hour.  Latymer Upper visited me at Westminster on Tuesday as part of their politics A Level syllabus.  All are welcome.

Last night I presented an award at the nOSCARS at the Mansion House.  This is Hammersmith-based Naz London’s spectacular annual event for those who work in BME sexual health across the capital.

Last week I hosted the wonderful West London Counselling Centre at Lyric Theatre.  With the NHS they are the primary providers of talking therapies in the borough.

I was delighted to attend the Mayor’s Nigerian Independence Dinner last Saturday.  Councillor Mercy Umeh held the event at Taste Restaurant at West London College to raise funds for her charities, the Lupus Clinic in Hammersmith and Maggie’s Cancer Centre at Charing Cross Hospital.  The traditional Nigerian food was excellently cooked and served by the College’s catering students.

The Carers’ Network has asked me to remind readers that they provide support for unpaid carers around the borough.  Here’s how to contact them. I’m happy to advertise local charities and events in this newsletter if you email me.

The Hammersmith Labour Party has seen an almost 400% increase in members and supporters since the General Election and Jeremy Corbyn’s election as Leader.  This week I spoke at a reception for new members of our Askew Branch at the Princess Victoria.  If you are interested in joining or helping out visit the Labour Party website.

Some sad news to end on.  I lost three good friends who were also tireless workers for the local community in the past month.  Irene Roberts for many years ran the tenants and residents’ association on Edward Woods Estate.  Veronika Ikezue ran Caring for Carers for nearly 20 years.  And Dan Filson was a Councillor and former Mayor of H&F, before moving to Brent and serving on the Council there.  They will all be greatly missed by their friends and families and the many thousands of people they helped.