United in the face of terror

From the display of unity at the England v France game to the Tricolore flying at half-mast beside the Union Flag on Hammersmith Town Hall, this week was a time for expressions -; great and small -; of our solidarity with the people of France. 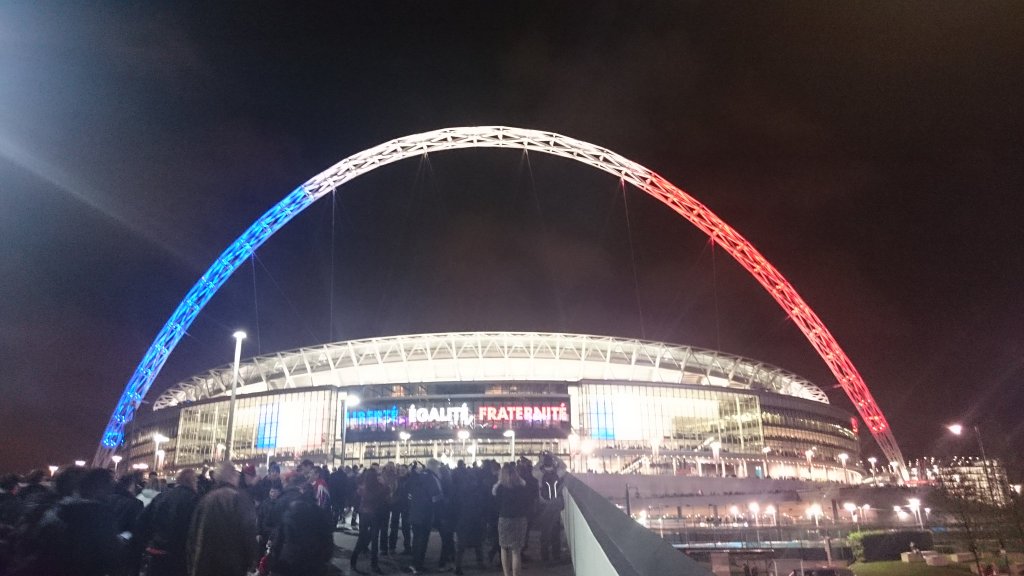 I was at Wembley on Tuesday to share the incredible atmosphere of compassion and support felt on and off the pitch.  Common values, a common heritage and devotion to democracy and the rule of law are what unites our two nations.

No one can doubt the resolve here and in Paris to defeat the nihilism of Daesh and to defend the open and inclusive societies that centuries of struggle and thought have created.

So I welcome the Government’s commitment to increase the intelligence and special forces budgets.  And the way that communities in Britain and France have responded with defiance to attempts to frighten and provoke them.

What we must not do is play the terrorists’ game.  Increased security at home and a strategy for defeating Daesh around the world is what we need now, not knee-jerk reactions that play into their hands.

I do not think that the new powers which the Government is seeking  -; in the Investigatory Powers Bill – to access internet records should now be introduced in a hurry, without proper scrutiny by Parliament.  Nor do I think we should reconsider our commitment to accept refugees from the terrible conflict in Syria.

This week I spoke at a seminar on Islamophobia in Parliament.  Although hate crimes in general and Islamophobia and anti-Semitism in particular are rare in Hammersmith & Fulham, they are on the increase here as elsewhere.

I have had many emails opposing British military operations in Syria.  There are circumstances when the UK should intervene in conflicts abroad.  In defence of our own or allied countries, as part of a UN sanctioned initiative or where there is urgent humanitarian need.

But I am not as of now persuaded that these tests are met.  Nor that there is a clear strategy for the defeat of Daesh without sustaining the Assad regime, responsible for more than 90% of the 200,000 deaths since 2011, and allowing it to inflict further butchery on the Syrian people.

When the Comprehensive Spending Review is unveiled next Wednesday I hope we will not see further cuts to police on our streets.  But a leak from senior officers in the Met suggests the opposite: that policing in London is facing further cuts to frontline officers and that this will weaken our ability to deal with terrorism.

Neighbourhood policing has been a great success in reassurance, community cohesion and intelligence gathering, including on serious crime.  It has already been severely cut.  Further reductions in PCs or PCSOs would be irresponsible and counter-productive

Hammersmith and Fulham Council funds 44 PCs in the borough but facing huge cuts of its own cannot be expected to do more. I spoke in an Opposition Day debate on policing last week and  asked the Home Secretary why H&F was set to lose all its community officers and two of its police stations.

Her reply -; that closing police stations is a good idea -; was all the more bizarre as David Cameron has been quietly lobbying to keep his local stations open.

That’s why I am backing a national petition, sponsored by the former Commissioner of the Metropolitan Police Lord Stevens, to protect neighbourhood policing.

Despite an extraordinary 98% of junior doctors voting to take unprecedented action to stop Jeremy Hunt’s attack on their pay and working conditions, the Government refuses to negotiate without preconditions.  I took part in an emergency debate in Parliament this morning to try and persuade the Government to talk but it was made all the more highly charged by Hunt refusing to attend. Coming on top of his misleading statements on pay and weekend mortality rates this will weaken trust further, which seems to be his aim.

To complete the all-out attack on our emergency services, it appears Boris Johnson wishes to get rid of one of Hammersmith’s fire engines.  Despite London losing 14 engines only two years ago, another 13 are to go and one of the two options sees the busy Hammersmith station losing one of its two engines.

In the three years to 2014, Boris Johnson missed his, already lame, target for building affordable homes in London by almost half.  He was not helped by councils such as Hammersmith & Fulham- in its final years of Tory control – actually reducing the number of social rented properties by demolishing them or selling them on the open market -; the only council in London to do so.

Those policies are thankfully a thing of the past in Hammersmith since Labour took control in 2014, but they risk coming back in style under the new Housing and Planning Bill which classes as affordable houses that require an income of £100,000 a year to purchase. 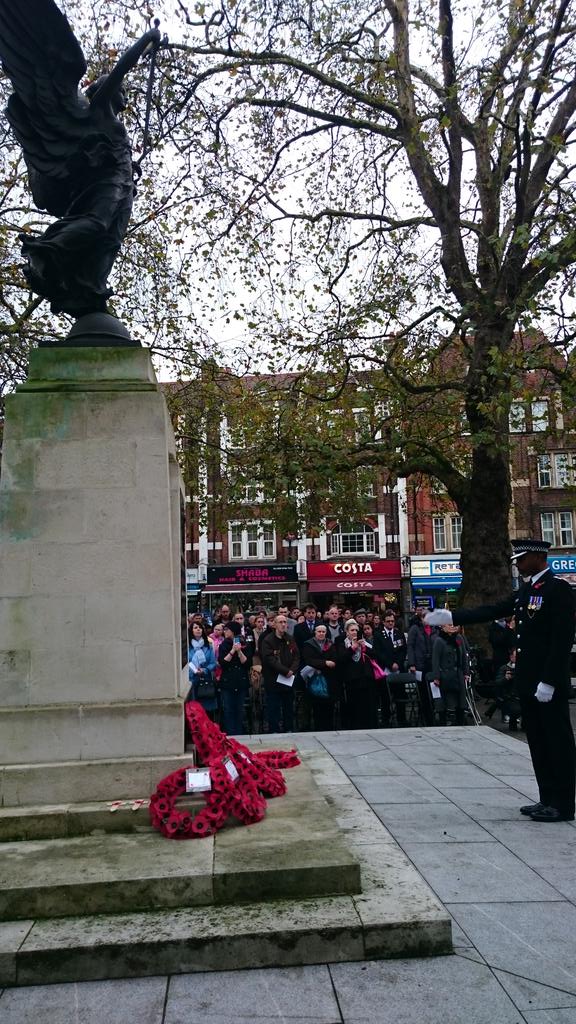 It was my 30th year attending the Borough’s Remembrance Sunday parade and service at Shepherds Bush Green last Sunday.  Wreaths were laid by the Mayor, the armed forces, ex-servicemen and women and by the representatives of the council and emergency services. Fr Richard Nesbitt of Our Lady of Fatima was joined in by Rev Cameron Collington of St Simon’s in conducting an ecumenical service for those of all religions and none. 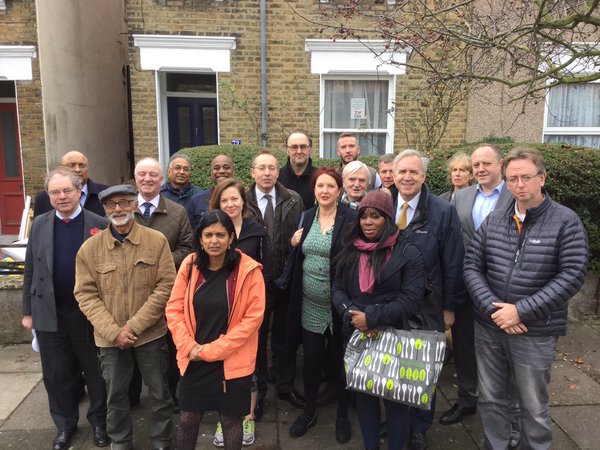 Last Monday I was back on the HS2 site at Old Oak with MPs from the Select Committee who had come to meet local residents as part of their scrutiny of the HS2 Bill. Later I met QPR who are planning to move their stadium to the development site.  Plans for Old Oak are changing all the time and it will be for the new Mayor of London to give direction to the project. If, as I hope, it is Labour’s Sadiq Khan, I have told him to rank the interest
s of local residents and businesses and the Scrubs as high as the new developments and transport links on the site.

I’ve been contacted by a number of residents who had been told by local Conservatives that Hammersmith & Fulham is planning to reduce the number of rubbish collections in the Borough. I am pleased that people don’t accept what they are told from this source without checking -; the Charing Cross experience has taught us that -; and I was happy to confirm that the rumour is untrue. The Leader of the Council, Stephen Cowan,  has pledged to keep weekly collections, despite the Government’s 30% cut to the Council’s budget.

Thames Water’s essential plans to dig a major new sewer through the borough to prevent homes being flooded with sewage during heavy storms proved controversial when it came to identifying sites for the construction and access works to take place.  The council intervened and this week new -; and less disruptive -; alternatives were proposed.  These are undoubtedly an improvement but further changes may still be argued for when the drop in sessions begin later this month.

Recently I visited London Plus Credit Union in North End Road and became a member. LPCU employs apprentices and local staff and is opening a satellite office in White City. There are too many pay-day lenders and loan sharks operating in our borough and credit unions offer an affordable and safe alternative for those needing short term-term and unsecured loans, as well as competitive savings accounts.

The excellent Addison Singers have two concerts coming up over the next few weeks. The first is a night of music from TV & film, and will be held on Saturday the 21 November at 7:30pm at St Andrews Church on Greyhound Road. The second is a performance of Handel’s Messiah at St Peter’s Church on Kensington Park Road, which takes place on Saturday the 5th of December at 7:30pm. Further information and tickets can be found on the choir’s website.

Last year the Council closed North End Road to traffic and held a Christmas Market. The event was so popular that there will be two Christmas markets this year. The first is on 28 November and the second on 12 December. Both start at 10am.

UNICEF will be hosting a free concert at Holy Innocents Church, Paddenswick Road on 11 December with all donations going Syrian children.  It starts at 7:30pm and will feature the World Music Award winning band, Don Kipper. If you have any questions about this event, please contact Loulla Gorman on loullagorman@hotmail.com.