Wishing you a peaceful and healthy Christmas

Save Charing Cross Campaign gets a boost

The campaign to save Charing Cross Hospital received some Christmas cheer this month as leading QC Michael Mansfield published his long-awaited report into the Government’s ‘Shaping a Healthier Future’ proposals.

The Mansfield Report is highly critical of the controversial plans to close four of the nine A&E departments in north-west London and downgrade two major hospitals, Ealing and Charing Cross.

The independent Report was commissioned by Hammersmith & Fulham and supported by four other Labour-run councils. I hope the NHS and the Government will now review their plans, especially for the demolition of Charing Cross.  If not, it may provide the evidence for a legal challenge.

You can read the full Report here.

Meanwhile, inside the NHS

The local NHS have been quiet of late, since revealing in the summer that the date for approving the demolition of Charing Cross has slipped back to 2017, meaning work itself was unlikely to begin until 2020.  So I thought it was time to update myself, and have been doing the rounds.

Here’s what I found out:

Following the closure of Hammersmith and Central Middlesex A&Es last September and Ealing maternity unit this July, Ealing Hospital is set to lose its paediatric department next June.

No further service closures are planned before the proposed demolitions, but there may be some movement eg of palliative care and elective surgery, and vascular care may be moving from St Mary’s to Hammersmith.

All the north-west London trusts, which are part of the Shaping a Healthier Future programme, are in dire financial states.  In the course of this financial year they are estimated to increase their total deficit by £150 million, including £88m at Northwick Park and £35m at Imperial.

I think this puts the redevelopment plans at risk, but the official line is that it ‘makes it more urgent we do ‘Shaping a Healthier Future’.

So much for it not being finance-led. Moreover, in order to cope with costs outstripping budgets, all trusts will have to make 5% a year cuts every year from now onwards.

The redevelopment of St Mary’s and Charing Cross, which will cost £1 billion, is the only game in town. I was told there is ‘no Plan B’ if the Department of Health or the Treasury refuses to fund it.

I queried the £35 million spent on consultancy firms in the past two years.  This was, I was told ‘money well spent’.  I disagree.

So where does that leave us?  With an expensive white elephant of a scheme which probably won’t go ahead as planned because it and the organisations that have to implement it are not fit for purpose.

But which, if it does finally lead to the wrecking balls coming to the Fulham Palace Road in five years’ time, will see a lot of public money spent on providing far diminished healthcare locally.

One thing I did confirm unambiguously is that Charing Cross is intended to lose its A&E and retain only a urgent care centre, with no consultant emergency service on site. If you ask the NHS about this they are programmed to give the Jeremy Hunt ‘there will be a local A&E’ reply but this is what they say in the draft of their business plan.  It couldn’t be clearer.

Emergency in the ambulance service

The London Ambulance Service is the first in the country to be inspected and graded by the Care Quality Commission.  Sadly the outcome, which I met both parties to be briefed on last week, is that the service is inadequate.  This is not to denigrate the people who work in the Service -; the levels of caring were found to be good. But there is such chronic understaffing that everything from response times to cleanliness of vehicles is not up to scratch.

Ambulances are supposed to respond to 75% of emergency calls within eight minutes. A year ago they could only manage 50% now that is 63% – still some way to go. And of course this masks some real failures in a minority of cases where people wait for hours at the roadside or at home.

The Service is now in ‘special measures’ and should be getting help to improve performance and recruit more staff but it is another part of the NHS that has been run down and demoralised under Hunt.

And the figures keep getting worse

I wonder if the people running the NHS and Department of Health read their own statistics. This month they showed Imperial had not met its A&E waiting targets for any week in the last year and that Charing Cross is already full up before the cold weather begins.  How they can possibly think we can lose the A&E and over 300 in-patient beds, I do not understand.

In two years we will celebrate 200 years of Charing Cross -; let’s hope it is marked by the threat to this great hospital being lifted for good. Of course Charing Cross, as its name suggests, has only been on the Fulham site for 40 years, but -; as a constituent reminded me this week -; prior to that we were served by West London, Fulham and the Western Hospitals for a century or more. Why the Government now thinks the growing population of the borough can do without a major emergency hospital at all defies explanation. 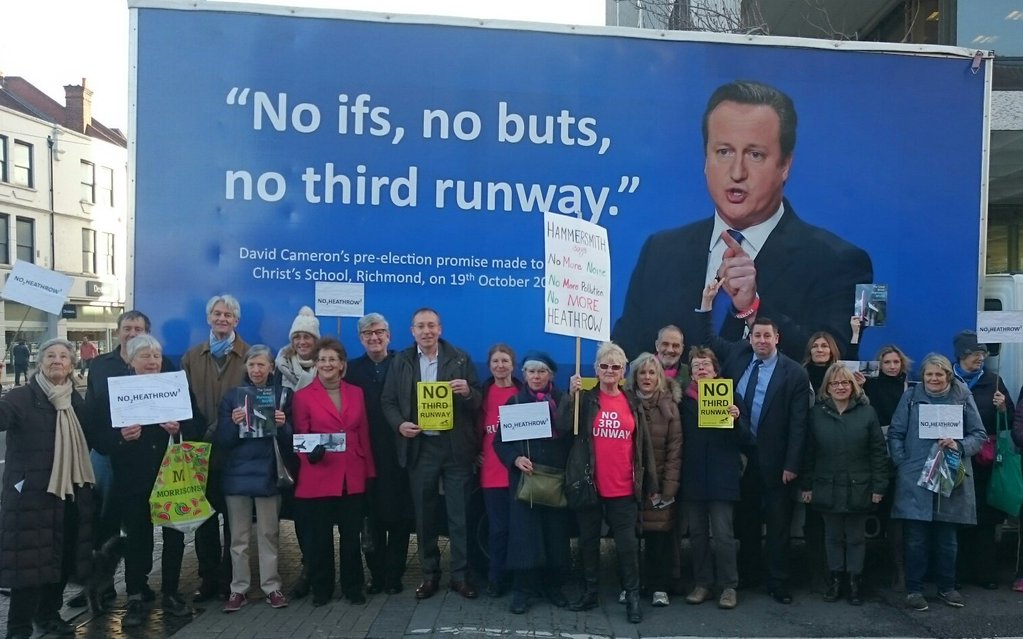 In 2009 David Cameron said ‘no ifs, no buts, no 3rd Runway’.  Last summer, the Davies’ Commission narrowed his choice to Heathrow or Gatwick. An easy decision you may think, as he’d ruled Heathrow out, but he promised to let us know by the end of the year.

He hasn’t. In what one Tory MP called a ‘grubby little announcement’, this week the decision was put off until summer 2016 at the earliest.  This is in order not to embarrass the Tory candidate for London Mayor, who opposes the Third Runway, but not it seems enough to take on his Party over the issue as he had promised.

Some anti-expansion campaigners were relieved at the news, but my view, as I put to the Transport Secretary in the debate is that this was Gatwick’s best chance  -; the delay is either to choose Heathrow at a less politically-charged time or to massage further its appalling noise and pollution stats.

However, the fight will go on unabated -; that was certainly the view of residents’ groups who assembled with LBHF Leader Stephen Cowan and me last week to greet the anti-3rd Runway Bus as it visited Hammersmith Town Hall on its tour
of West London.

I spoke and wrote at length about my decision to vote against the UK bombing Syria.  The fact that David Cameron’s claim that there were  70,000 moderate ground troops to move into Daesh territory fell apart almost as soon as he made it reinforced my view -; even the Conservative Chair of the Defence Select Committee referred to them as  ‘bogus battalions’.

I received 750 letters and emails on the subject -; of which fewer than 20 supported the current military action.  None of this detracts from my admiration of the skill and bravery of our armed forces.  And it only increases my fear for the people of Syria, especially those who have been forced to flee their homes or their country.

I raised the issue of refugees in Europe with the Foreign Secretary this week.  It seems to me perverse that Britain will not help people in the camps in Greece and Hungary or even France, especially given some are young children whose nearest relatives are in the UK.

I will be following this up by visiting the ‘Jungle’ refugee camp near Calais next week. 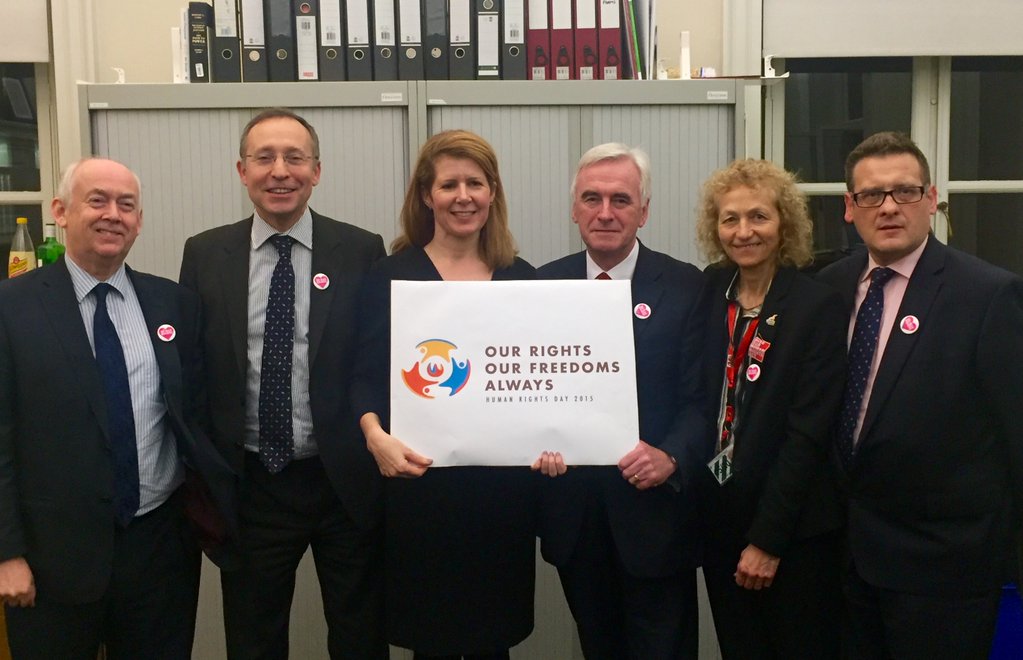 As Shadow Minister for Human Rights I replied to a very good Commons debate to mark UN International Day of Human Rights on 10 December.  Although there was much debate around abuse of human rights around the world, many MPs focused on the Government’s outrageous plans to scrap the Human Rights Act, introduced by Labour in 2000.

With Liberty I unveiled a banner supporting the Act and with H&F Amnesty members attended an Amnesty UK reception hosted by the Speaker of the House of Commons at which he and Jeremy Corbyn spoke. I also hosted meetings on human rights abuses in Bahrain and the Emirates, to highlight the Government’s lack of concern for those countries.

And I raised with Michael Gove the tragic cases of vulnerable people in hospital who, without their or their families’ consent, have ‘do not resuscitate’ instructions added to their medical notes.  These are exactly the type of case which the HRA protects, and which its repeal  would put at risk.

Little would surprise me about the Conservative’s relentless attack on affordable housing, especially in London, but a new low was reached last week when a last-minute amendment to their Housing and Planning Bill, said all new council tenancies would no longer be secure.

In other words every two or five years, families will now have to justify why they should stay in their own homes.  I spoke about this in a housing debate called by Labour, and, on the same day, in a debate  on Transport for London, exposed their plans to build 10,000 luxury homes on land they own in London, to compensate for the £2.8 billion in grant George Osborne is taking away from TfL over the next five years.

I also highlighted how the improvements to the District, Circle and Hammersmith & City Lines have been put back by up to five years, and called for the Olympia service to be restored. 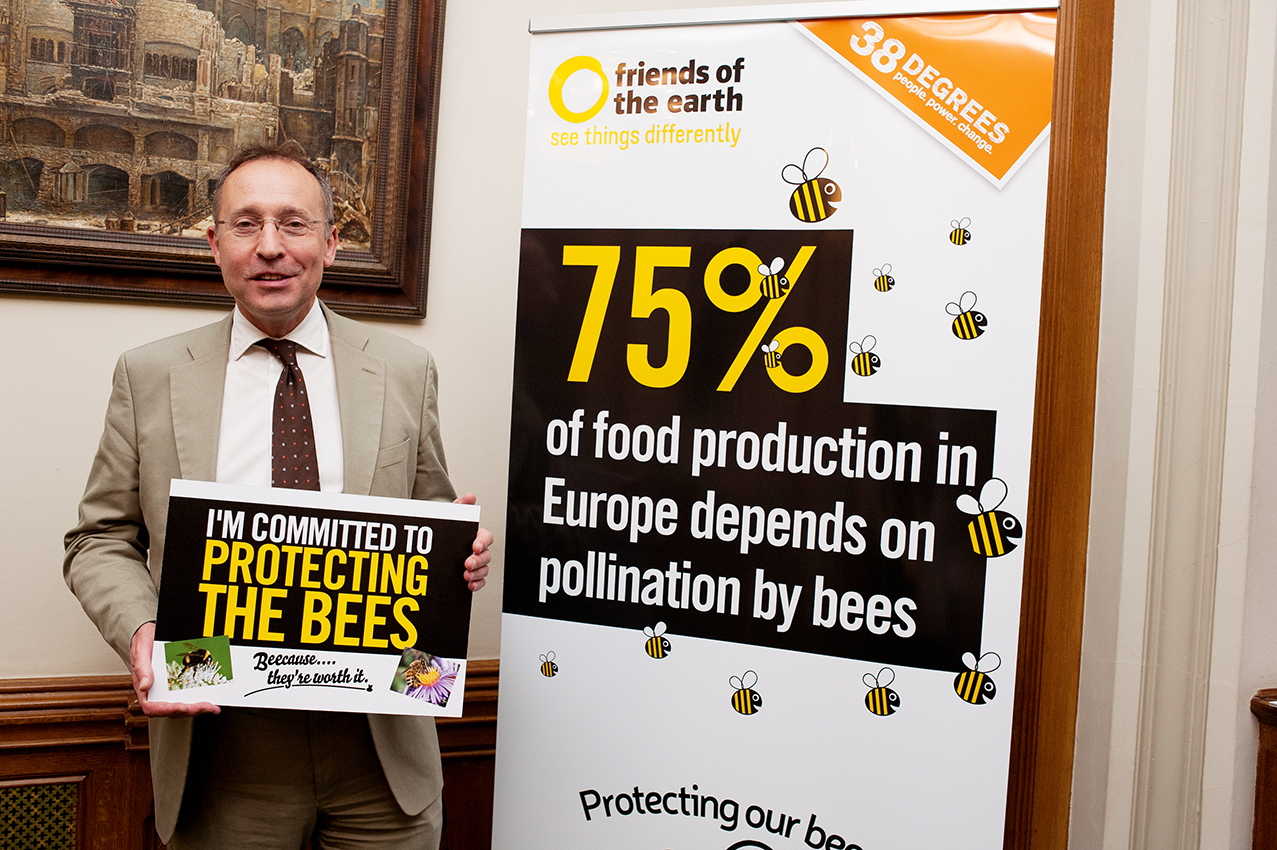 Hundreds of constituents have written to me to ask me to challenge the Government’s failure to implement a permanent ban on bee-harming pesticides. I took part in a debate on that subject and will continue to raise the issue in parliament whenever I can.

T-Tip of the iceberg

There are still many unanswered questions about the Trans-Atlantic Trade and Investment Partnership trade deal. In particular, will it lead to privatisation of the NHS and other public services, and will it allow multi-national companies to avoid UK and European law in enforcing contracts, an issue I raised in the recent debate here. 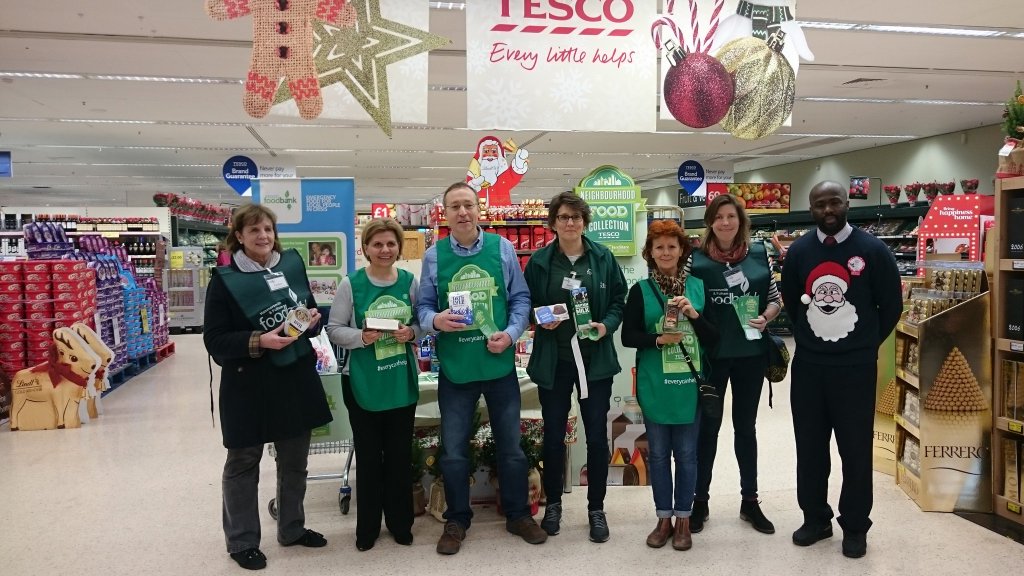 Last month I raised my concerns about the rise in London’s foodbanks but I would also like to recognise the hard work done by our local foodbanks in H&F. Last week I joined the volunteers and staff at Tesco Brook Green for their Christmas collection.  As always, shoppers were incredibly generous.

This is busy time of year with carol concerts, like that at my local church St Saviour’s, and Christmas fairs, like the West London’s Free School’s, complete with Santa and snow machine.

On behalf of constituents I raised in Parliament the continuing failure to compensate victims of contaminated blood products and delays and poor service by the West London Coroner.

I visited the Chess in Schools London Chess Classic at Olympia -; where local schools and Grandmasters mingle.  And the Koestler Trust, based  at HMP Wormwood scrubs, which is the UK centre for prison arts.

I will be working up to Xmas Day -; with traditional visits to the Crisis day centre and LBHF’s pensioners’ Christmas lunch, but my office and email will be closed until the New Year.

So may I take this opportunity to wish everyone a good Christmas and a peaceful and happy New Year.