Can Jo Cox’s legacy be a kinder politics?

Beyond the terrible sadness of a young mother brutally murdered while simply doing her job by trying to help those she was elected to serve, there is a determination both to continue her humanitarian work and to improve the tone of political debate that provided such a harsh background to her death. 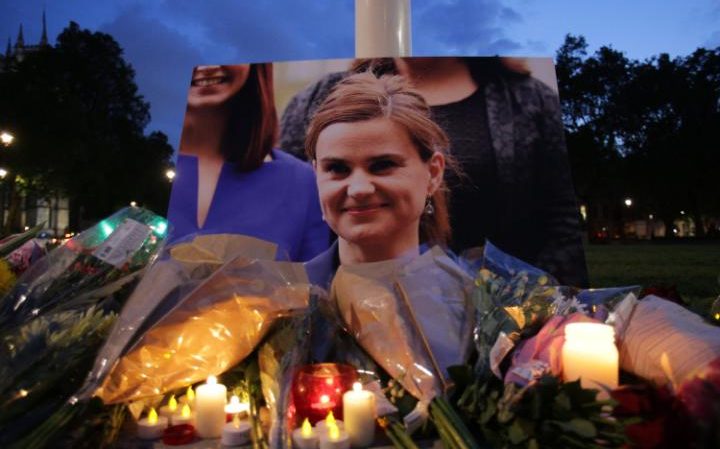 This is what I wrote immediately after we heard Jo had died last Thursday:

The death of my friend and colleague Jo Cox is above all else a personal tragedy.  Not just of a young life cut off at its most hopeful and exciting point, but of a wife and mother who completed a family and a remarkable human being, who achieved and inspired in equal measure.

Of course it is significant that Jo was an MP, because for all our faults MPs are an essential component of democracy, and this brutal act is a direct challenge to the open society painfully crafted over centuries.  But no one should be killed just for doing their job, whether police officers, MPs or any public servant.

My first thought was to speak to my staff about their safety and to the police to review the security at my constituency office.  We make ourselves available to constituents because without doing so we simply cannot do our job.  MPs are particularly vulnerable at surgeries as attacks on Stephen Timms and Nigel Jones demonstrated.  But it was Andrew Pennington, Nigel Jones’ assistant, who died in that attack, and we have a duty of care to those we employ.

Jo was an exceptional person and an exceptional MP.  She saw being an MP as a means to continue her work as head of policy and humanitarian campaigns for Oxfam, not as a title or an end in itself.  So although only elected last year she was already changing government policy, most notably on refugees from Syria.

I suspect that like me 95% of her contacts with the public were positive and warm.  This should not be a surprise as an MP’s first duty is to problem solve and advocate for constituents.

But there is now a disconnect between the personal experience people have of their own MP and the general narrative that says that as a class they are all greedy and lazy and to be treated with disdain or worse. This negative discourse is now part of politics in Britain and beyond.

Jo was a fearless champion of human rights, unstoppable in upholding the cause of the dispossessed.  We can learn from her example by continuing to speak out.  If we also learn to do so in a way that does not disrespect or demean those with whom we disagree, she will have an even greater legacy.

I really do not know if we -; public and press as well as politicians -; are up to the task of civilising the debate on issues like the Referendum, without losing the argument and analysis that a working democracy needs to thrive.  For my part I will try.

Britain decides on its future 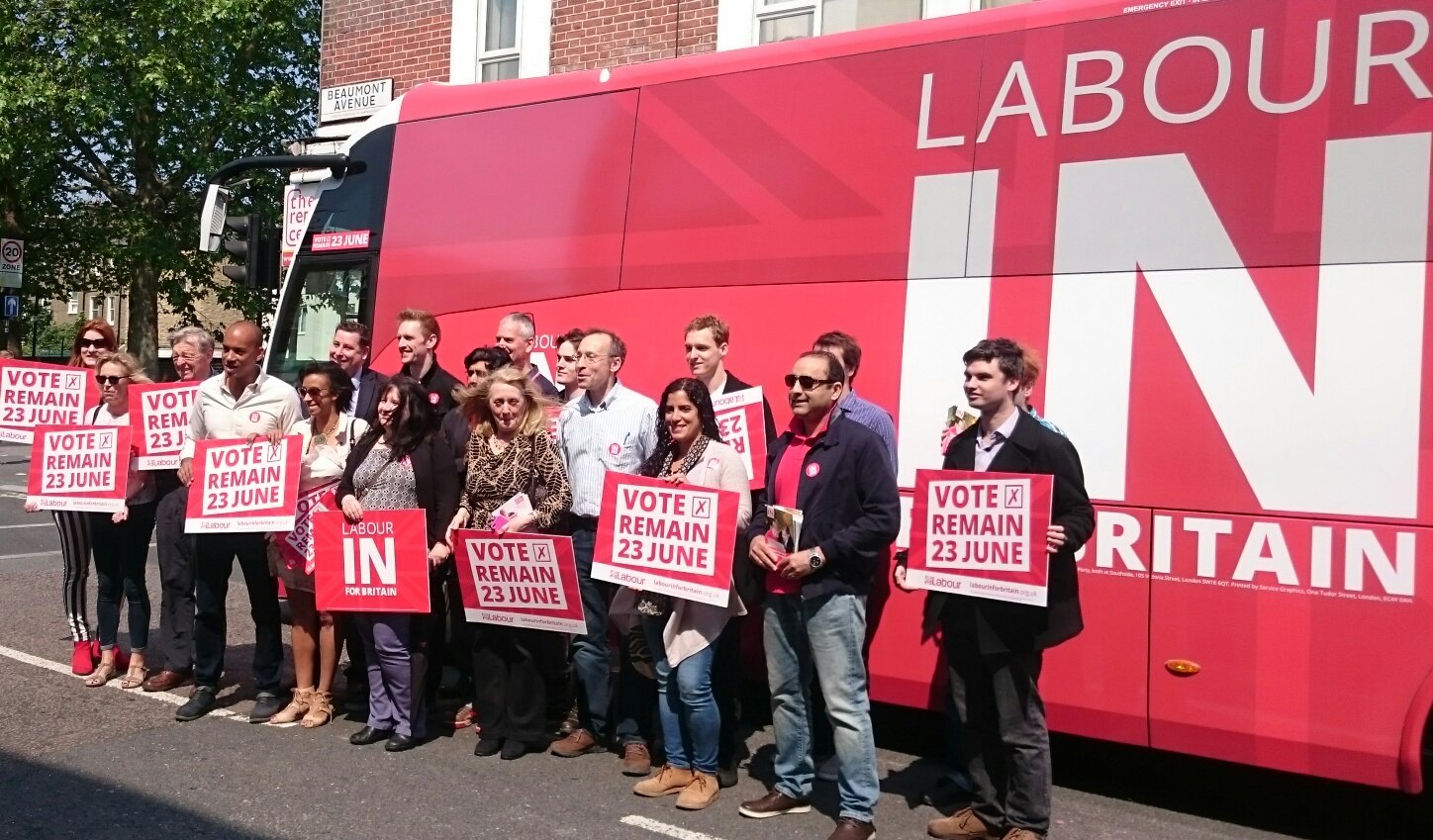 Two weeks ago I set out my reasons for voting Remain in the EU Referendum.  Since then, until campaigning was suspended following Jo’s death, I have been knocking on doors around the constituency from West Ken to White City to see what the voters of Hammersmith think.

The answer is very strong support for Remain: Hammersmith repeatedly ranks as one of the most pro-EU places in the UK.  It is also one of the places with the highest proportion of people from the other 27 EU countries.  No coincidence there, I think.

Senior Labour MPs like Chuka Umunna have visited to help get the Remain message across, but so have Tories like Europe Minister David Liddington, who spoke at a public meeting for the Somali community with me.

Last weekend I appeared on Sunday Politics to put the Remain case but the most impressive support for Remain was I thought the letter signed by hundreds of leading figures in European society and culture -; all thought up and organised by Shepherds Bush resident Phillippe Auclair.

For all its faults the EU has been a main driver of prosperity, democracy and tolerance in Europe for half a century. It would be an incredibly backward step to leave, a point I put to Michael Gove in the Commons last week.

Please vote Remain on 23 June and encourage your friends, family and neighbours to do likewise.

Last week I spoke in a debate on the lack of affordable housing in London, and the increasing crisis in Hammersmith & Fulham. For the average H&F private sector renter 58% of their salary will go towards their rent. The average property price in the Borough is approaching £1 million, over 20 times the average salary.

For many families council or housing association homes are the only affordable option, but many of these were sold off by the previous Tory council and thousands more face sale under the new Housing and Planning Act.

Under Boris Johnson, last year saw the worst year for affordable housebuilding in London since records began 25 years ago.  Sadiq Khan has committed to double the number of homes built and more than double the proportion that are genuinely affordable.

My neighbouring MP Rupa Huq, who campaigns with me against the Third Runway, asked the Prime Minister when we will have a decision on airport expansion and if he stands by his statement, ‘No ifs, no buts, no third runway’.  He confirmed for the first time that the decision would be made ‘in the summer’ and since we know it will be when Parliament is sitting that means between 27 June and 21 July or possibly – as it is still technically summer -; when we sit again between 5 and 15 September.

He said nothing on keeping his promise!

There were understandably subdued celebrations for the election of new Tooting MP Rosena Allin-Khan last Thursday.  But Rosena, an A&E doctor and Tooting born and bred, did brilliantly in more than doubling the Labour majority. 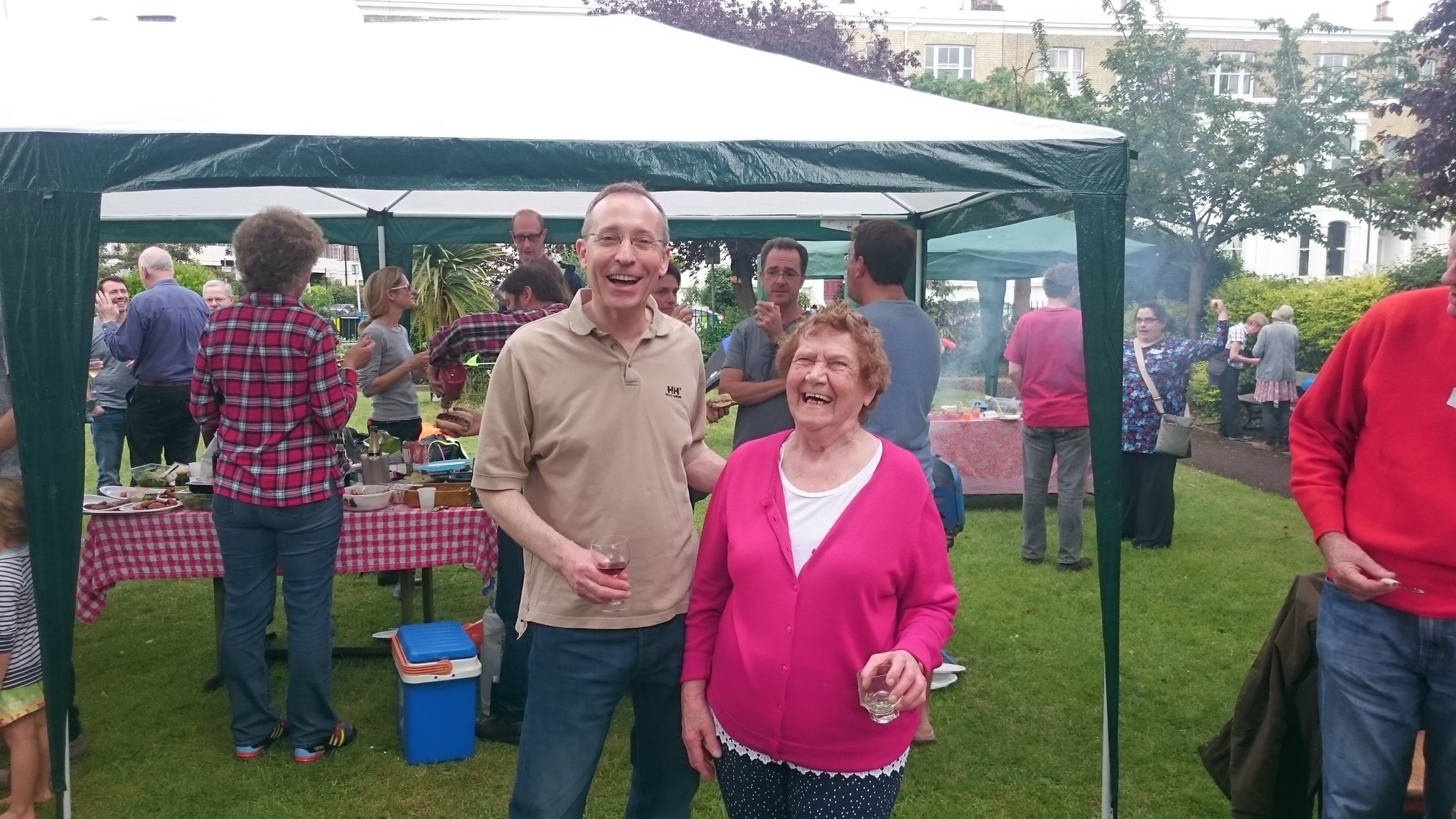 Last Sunday was a day of parties around the borough to mark the Queen’s 90th birthday. Here I am at Westcroft Square for a lavish spread put on by the Residents’ Association, where I met Betty, the square’s oldest resident, who not only shares a name with Her Majesty but will herself will be turning 90 in six months. 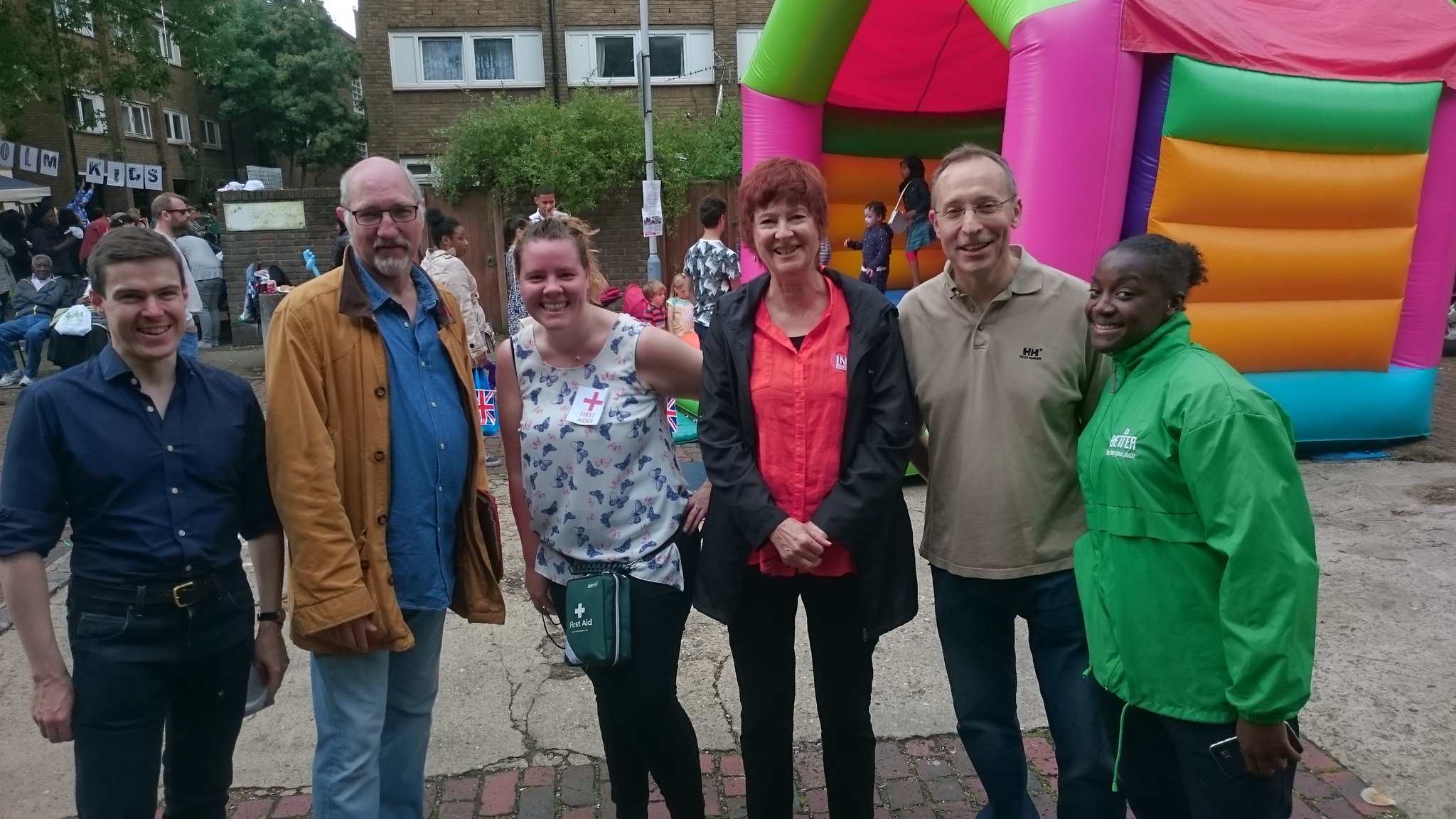 After that I headed to the Bayonne Road Estate in Fulham to join in the Big Lunch organised by Twynholm Baptist Church. A big thank you to the London Sports Trust, St Albans Youth Club and the Fulham Reach Boat Club for a great and fairly dry afternoon. 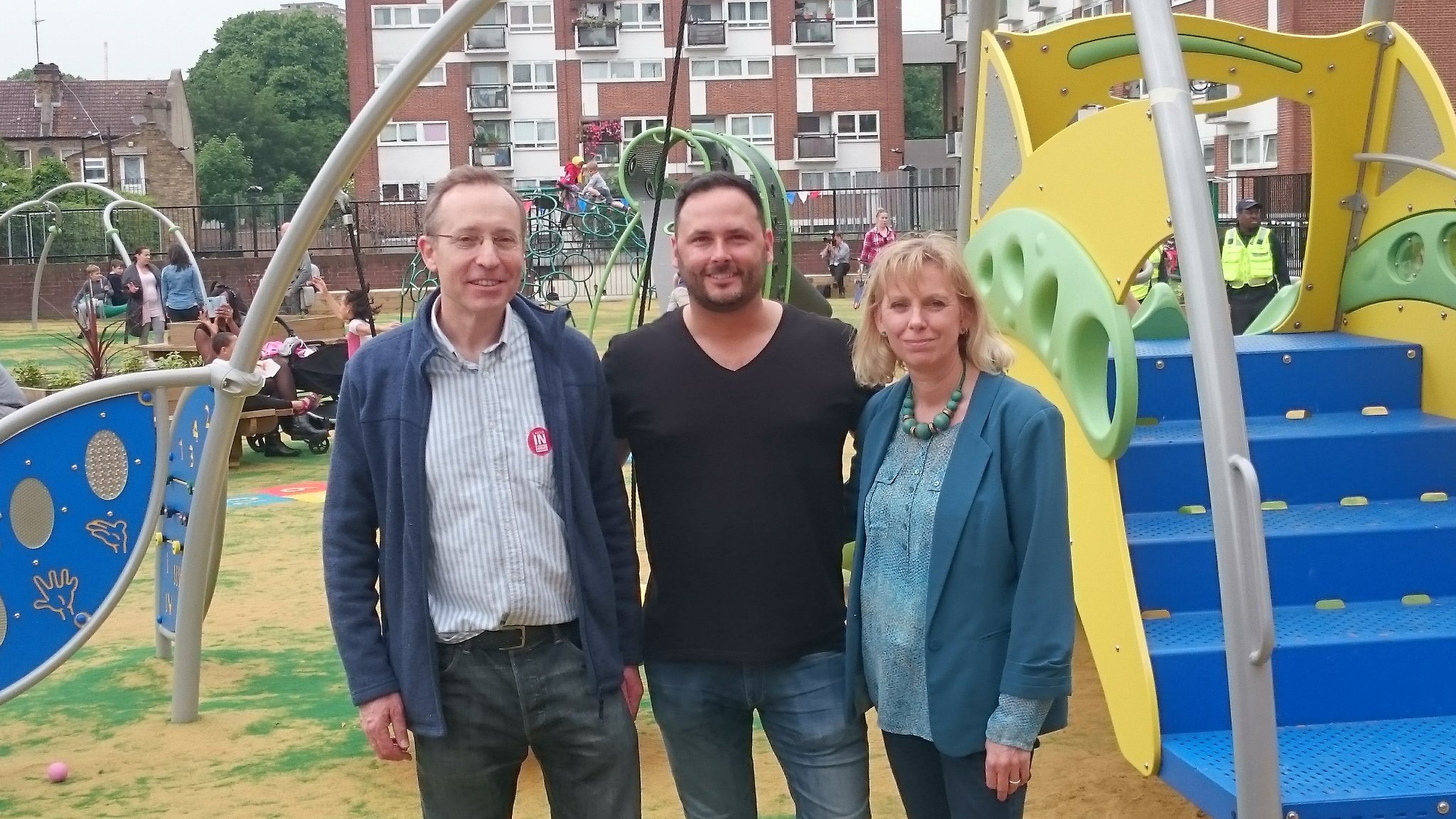 Round the corner in Field Road we opened another new play park. The area had been locked and left derelict for many years, but following campaigning by local residents, and help from Fulham Reach councillors, Guy Vincent, Vivienne Lukey and Iain Cassidy, work began and the results are impressive. 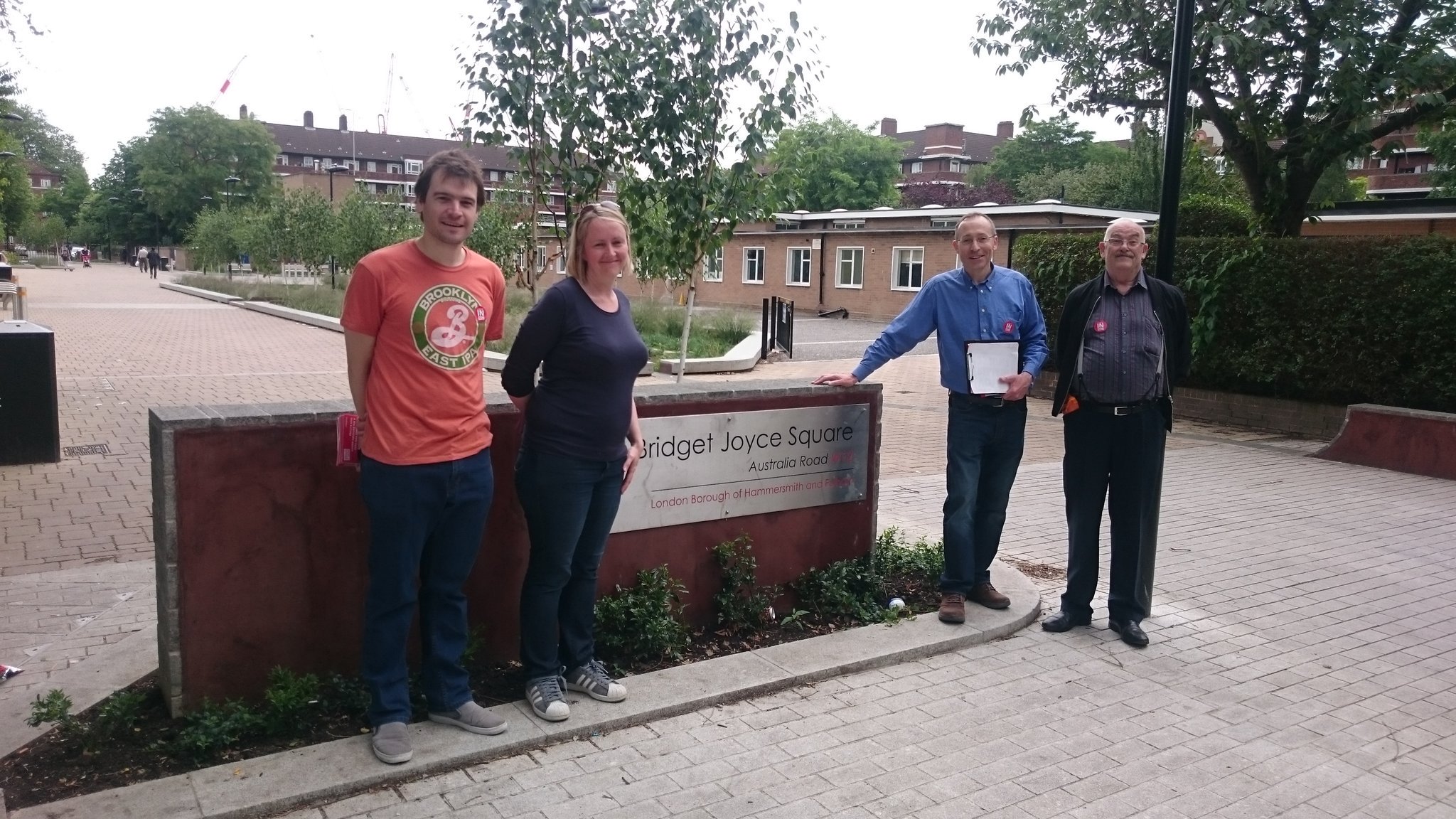 Last week was also the AGM of the Hammersmith Society at the Dorsett Hotel on Shepherds Bush Green, one of the winners of the Society’s Environment Award last year. This year’s award winners included H&F Council for their (literally) ground-breaking Sustainable Urban Drainage Scheme in White City -; local councillors Max Schmid, Sue McMillan and Colin Aherne showed it off to me.

I was delighted to speak at the new Debating Club at Miles Coverdale and the politics project at Greenside, two excellent Shepherds Bush primaries, last week. The research and preparation the pupils undertake make these much the toughest and most thoughtful grillings I get.

The first Iftar (breaking of the fast) I attended this Ramadan was at Egyptian House in White City.  It was organised for local Muslims by the Coptic Christian community, setting a great example of interfaith unity.

We were also graced with the visit of Cardinal Vincent Nicholls last week to celebrate a Mass marking the 150th anniversary of Holy Trinity Church Brook Green.

Finally, I would like to pay tribute to a dear friend and community champion, who died last month and was buried a week ago following a very moving service at Our Lady of Fatima, her church in White City.

Kathy Dolan was a wonderful, warm person with a big family in H&F, Ireland and around the world.  She also looked after everyone on the Wood Lane Estate for decades, keeping order and making sure problems got sorted out.

She was full of compassion and good humour.  A doer not a talker.  She will be sorely missed by all who had the good fortune to meet her.