A month on and it doesn’t look any better.

The UK economy is heading down again after the deepest recession and slowest recovery on record.  There is an irony here.  Cameron tried to pin responsibility for the global recession of 2008 on the then Labour Government, which in retrospect can be seen as the fault of banks, markets and governments around the world over many years.  Gordon Brown and Alistair Darling stuck around to mitigate the worst effects of that.

Brexit is a home-grown and deliberate act of economic stupidity to try and solve internal political difficulties. David Cameron called an unnecessary referendum to contain the threat of UKIP to the Conservative Party, and cope with his own Europhobic backbenchers. He spectacularly failed, had no contingency plans in place, but he and George Osborne haven’t stuck around to clear up the mess.

Brexiteers will tell you not every economic indicator is down -; the collapse of sterling means exports are more competitive, though that is a bit like saying car crashes are good for the scrap metal industry.

And it misses the point.  Whatever happens in the next few months, it is the medium and long-term fallout from Brexit that will inflict real damage on the UK.

We are now faced with years of negotiations and uncertainty, leading to isolation and impoverishment of not only our economy but our culture and place in the world.

I think this is the worst political decision of my lifetime, and many Hammersmith & Fulham residents feel the same.  70% of residents in Hammersmith & Fulham voted to remain in the EU, making it the 15th most ‘Remain’ area in the UK of 382.  Almost a thousand people have written individual letters to me about the consequences of Brexit and what we do now (to be fair, five of those supported Brexit).

I take very seriously the strength of local feeling about our membership of the EU and will consider carefully all options as it becomes clearer what our settlement with Europe could look like.

Given that negotiations with Europe will take at least two years if not more, the public appetite for leaving the EU could change, which would of course be very welcome.

I welcome what Owen Smith and others have said about putting the renegotiated terms to a vote, either through a second referendum or a General Election.

In the meantime, I think the objective of our negotiations should be to replicate, as far as is possible, the conditions of our EU membership with full access to the single market, freedom of movement for people and goods and services and full protection for Britons living abroad as well as Europeans who have made Britain their home.

Post-Brexit bigotry -; and how Hammersmith responded 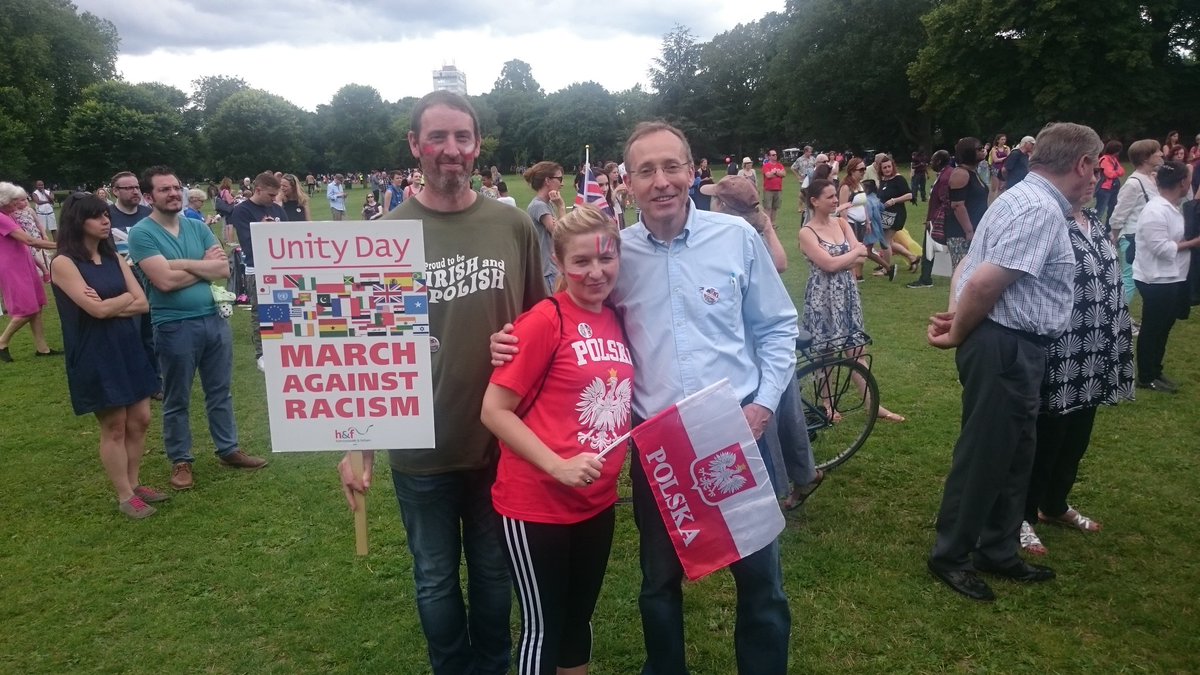 I was horrified by the racist attack on the Polish Centre in Hammersmith a week after the Referendum, and raised this several times in Parliament. It led to a full debate on the contribution of the Polish community to UK society from the Battle of Britain to powering today’s economy. Polish is now the second most widely-spoken language in the UK, and POSK is the centre of Polish life here.

The Leave vote has emboldened the minority of racists and bigots and it is the responsibility of all of us to reaffirm our support for the multicultural society that makes London the greatest city in the world.

I’m delighted to say that our council in H&F led the way by organising the Unity Day march and rally two weeks ago.  We assembled on Shepherds Bush Green and marched via the Polish Centre to Ravenscourt Park for speeches and entertainment that marked the richness of west London, home to a hundred different nationalities and cultures.

4,000 people turned up and the day was great fun.  You can read a report of it here and my speech here.

Meanwhile, I am working with the council, local voluntary groups and Hammersmith resident Lord Dubs to help with the continuing refugee crisis.  H&F has promised to accept up to 50 refugee families and even sourced properties from private landlords in preparation.

Alf Dubs -; a child refugee from the Nazis himself – forced the Government to concede that this should include child refugees, including those in the squalor and danger of the ‘jungle’ camp in Calais, which both he and I have visited.

But weeks later only a handful have arrived here -; despite over 150 children having family already in the UK, who are desperate to be reunited and ready to house and care for them.  The British and French authorities blame each other for the delays, while the children risk their lives by trying to hop onto lorries crossing the Channel.  We have asked to see the new immigration minister urgently to resolve the log-jam. 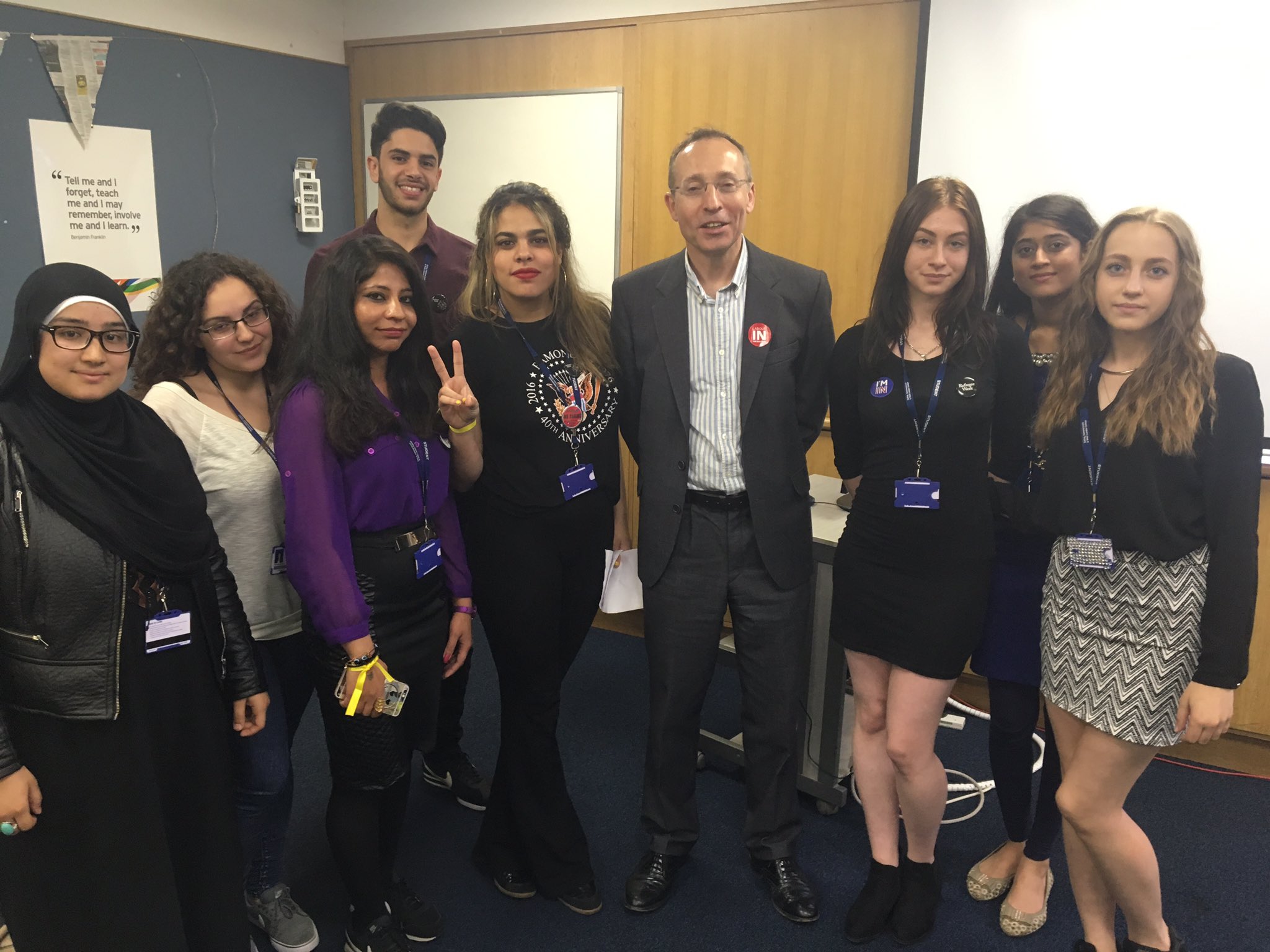 I am delighted there is so much support for refugees in Hammersmith.  For Refugee Week I attended meetings and celebrations at the Town Hall and Hammersmith & West London College organised by the Refugee Forum and Refugees Welcome.

I also spoke at Brackenbury School’s assembly to thank them for their support for Send My Friend to School, an international campaign to help the millions of children around the world who get no education.  Brackenbury and John Betts pupils visited the Polish Centre after the attack to show sympathy and support.  We have some great schools in H&F.

I am supporting Owen Smith in the Labour Leadership election later this month.

I will be writing to the 2,000 members and supporters who have a vote in that election setting out my reasons for supporting Owen.

It is too late to join and get a vote now, but if you are a member of a trade union affiliated to the Labour Party (eg UNITE, GMB, UNISON, USDAW, CWU) you may still have time to qualify -; reply to this email and I will explain how.

Meanwhile in the real world 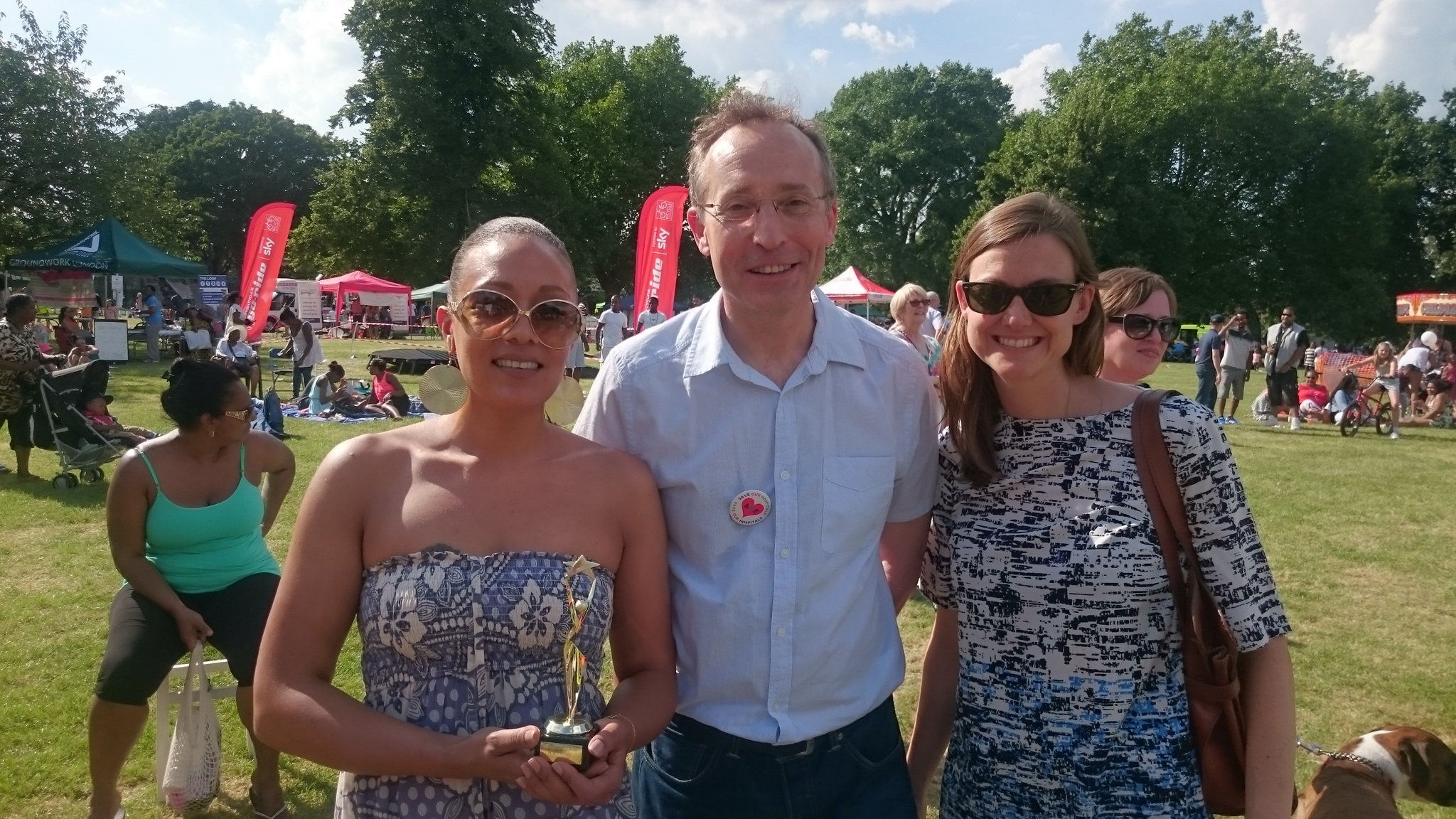 If the political weather is st
ormy, the actual weather has been kind to us in Hammersmith this summer, and there have been lots of opportunities to enjoy it.

Wormholt Park formally opened, by hosting the White City Festival last weekend.  Over £1 million has been spent by the council on a complete makeover, but crucially it has been the Friends of Wormholt Park, chaired by Derrick Wright who have shaped the project so it reflected residents’ needs.

I was delighted to be asked to open the new Park and everyone was pleased my speech was so short. It is impossible to thank everyone who contributed to the success of the project and the day, but I must mention Hayley Wedgbury, who has raised tens of thousands of pounds for play equipment for disabled children, including the Ability Swing now taking pride of place there. 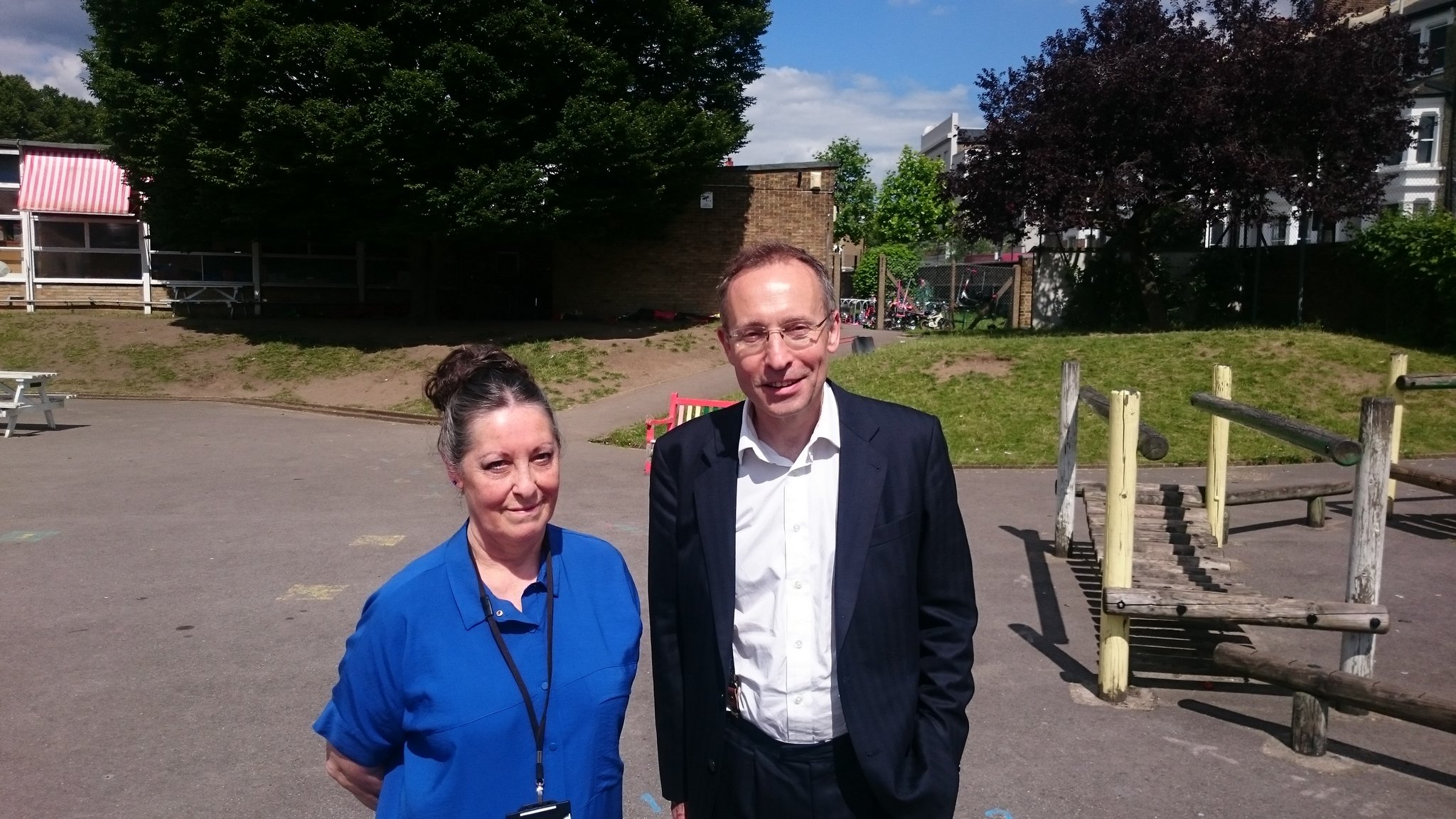 Lots of comings and goings as always.  Lynne Switzman retired after 39 years as a nursery teacher at Greenside Primary. We celebrated her devotion to generations of local children, some now with children of their own at the school, with cake and a dance off between the children and adults.  No pictures of this are available I am pleased to say, but we adults felt robbed by the result. 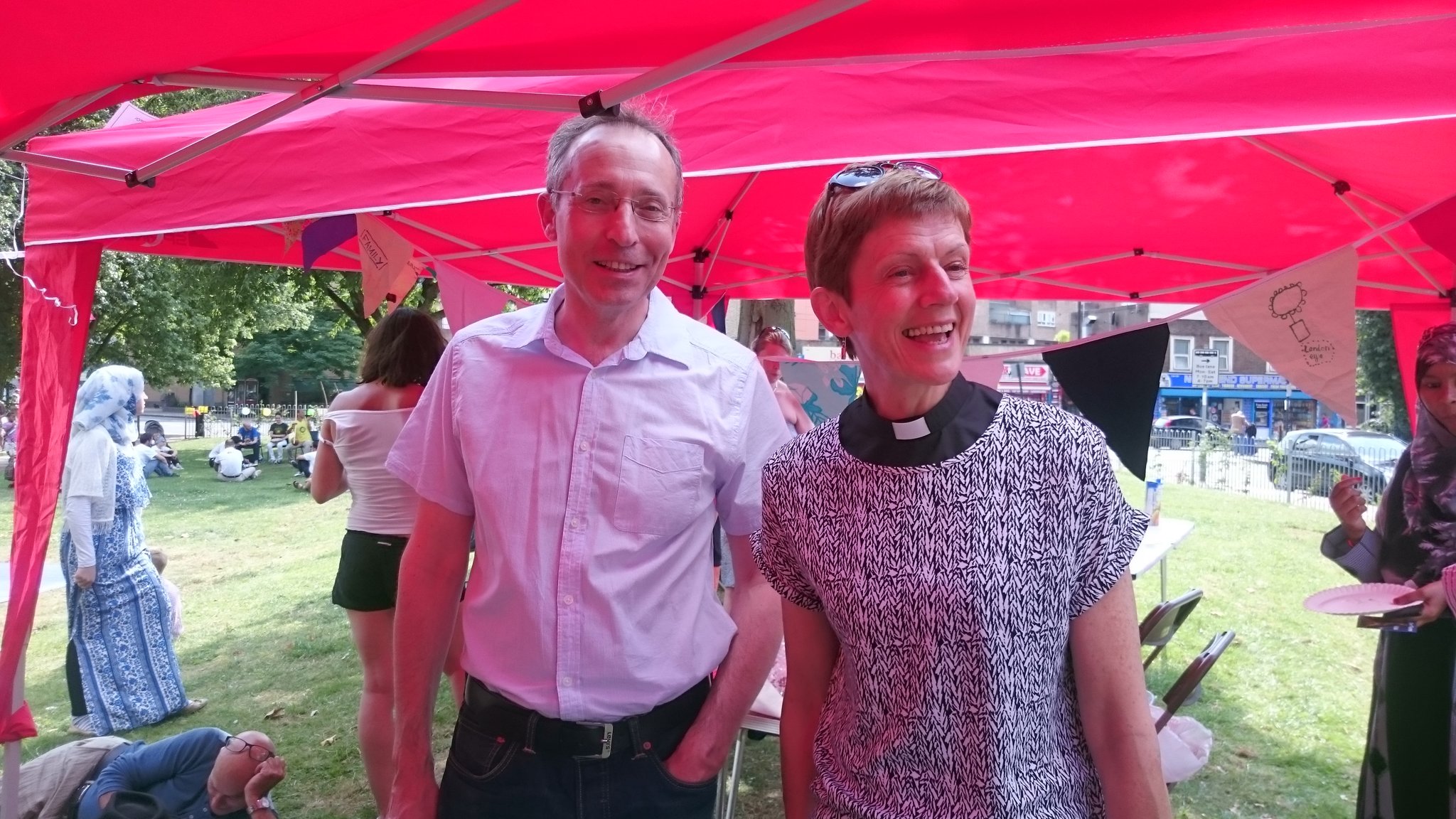 Lesley Bilinda was inducted as the new -; and first woman -; vicar of St Andrew’s Fulham Fields, an incredibly popular choice for a thriving parish.  Last weekend we both attended the summer picnic for West Ken and Gibbs Green residents, still fighting the threat of demolition of their 750 homes by mega-developer Capco.

I helped run the bar at the Upper Room’s party in Wendell Park, to raise money for their excellent work with homeless and workless people in Shepherds Bush.

The full range of young talent was on display when I attended Sulivan School’s open air concert, Good Shepherd’s staging of Oliver! and Miles Coverdale’s new debating society.  Phoenix and Burlington Danes visited me at the Commons for a tour and to find out how we keep messing things up.

And thanks to Queen’s Club Gardens, Argyll & Glyn Mansions and Stamford Brook Residents’ Associations for their hospitality at lovely summer parties.

I must end on a sad note.  An old friend and colleague, who taught me so much about the borough, its politics and its life, died last week.

Former headteacher Ian Gray was a life-long Fulham fan, Labour stalwart and pillar of our community.  First elected in 1962, he was still a Fulham councillor when I was first elected in 1986.

As Housing Committee Chair in the 1970s he not only built hundreds of good quality affordable homes but bought up hundreds more Victorian properties often for a few hundred pounds each. Those now form the core of the council’s housing stock and -; pepper-potted as they are in almost every street in the borough -; have created the uniquely mixed community we enjoy today. It was also probably one of the shrewdest real estate investments of all time.

Ian’s son Adam followed him as a councillor at the tender age of 21 and also served Fulham with distinction.  My thoughts are with him and the family at this time.