Despite David Cameron’s promise (‘no ifs, no buts, no 3rd runway’) and her own opposition to Heathrow expansion, Theresa May today gave a provisional go-ahead for a 3rd runway to be built at Heathrow.

The current two runways cause 28% of severe noise nuisance created by ALL European airports.  A 3rd will increase flight numbers by 50% and, importantly for Hammersmith residents who have previously escaped the worst noise, the alignment is directly above Hammersmith and Shepherds Bush, and these will be some of the worst affected areas.

There will be a lot more to say and do about this decision in the coming months and years, for today I limit my comments to three points.

This is a bad decision.  Most of the thinking about airport expansion in the south-east is out of date. Ten years ago hub airports were thought of as the future, and Heathrow was the only widely-touted option for expansion -; unsurprisingly as Heathrow then owned Gatwick and Stansted and played down their potential.

Now the economic and logistical case between Heathrow and Gatwick is marginal, the cost to the taxpayer is nil at Gatwick versus £15 billion plus at Heathrow and the downsides of Heathrow -; not just noise but air quality, congestion and safety -; hugely outweigh any plus factors.

Unfortunately the public discourse has not caught up with this reality.  We must see that it does before Parliament makes its decision in about a year’s time.

This is a reversible decision. The risk of  the 3rd runway not being built is great; and the risk of it not happening for many years is a certainty.  The financing, complexity of construction, and above all the strength of opposition means this is a project going nowhere for the foreseeable future, with several years of legal action likely after two years of formal decision-making.

My experience over the past 30 years is that bad planning decisions often either get overturned or take so long to come to fruition that their sponsors are forced to abandon them.  I can see this happening with Charing Cross Hospital and the redevelopment of West Kensington, and even more so with Heathrow.

This is a political decision. Not in a Party sense as there are divisions within both main Parties, but in the sense that pressure from powerful interests can force the hand of Government.  With May, Hammond and Johnson all on the record as opposing a 3rd runway, the decision should have been different.  It is an early indication (along with Hinckley C) that Mrs May is not in control of her own Government.

The vote in Parliament has been put off for a year -; perhaps to save the blushes of Boris, Justine Greening, Greg Hands and all the other ministers who should be standing up for their constituents.  But it gives time to build opposition.  For many MPs not directly affected, this is a marginal decision.  Our job over the next 12 months is to persuade them to do the right thing.

Hammersmith & Fulham Council and it’s leader, Stephen Cowan, have been at the forefront of re-settling refugee children from the ‘jungle’ refugee camp in Calais. I raised this in the House of Commons, to add to the voices calling on the Government to act but it has taken a lot of work on the part of H&F Council and others to force the Government to live up to its obligations as set by Lord Dubs in his amendment to the Immigration Act, the so-called ‘Dubs amendment’.

As many of you will already know, Alf Dubs was one of the children rescued from the Nazis by Nicholas Winton in the kindertransport, and he has been very personally involved in working with charitable organisations to help children trapped in Calais. His amendment gave real hope to these children, although it took a significant amount of pressure before the Government took any action.

Let us be clear, the scenes in Calais are appalling, and there are very young, and very vulnerable children at real risk. The tabloids will have you believe that these are all adults pretending to be children, and that they do not deserve our help. Cllr Cowan and Cllr Fennimore have both visited the Calais camp at their own expense, as have I, and we have seen the many young and vulnerable children living there alone and without family. Cllr Cowan met one young child, a 9-year old boy, when he visited in August. Since his visit that boy has disappeared.

The Government’s delays have meant that many children, like that young boy, have disappeared before they had a chance to be moved to somewhere safe. These delays are unforgivable, but I am proud to see that H&F Councillors and so many others have stepped up to lead the way in helping these children. 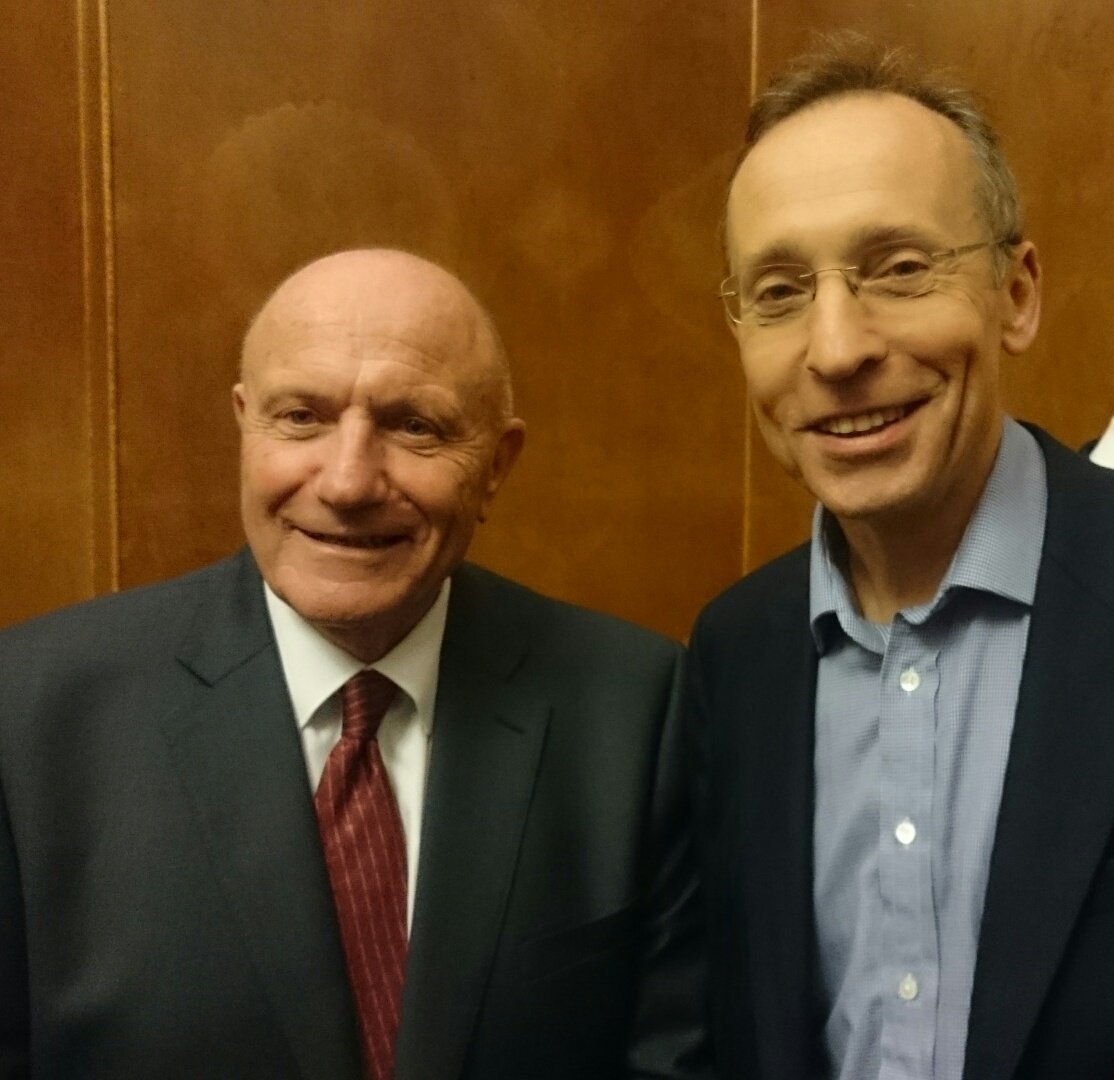 Hammersmith & Fulham has conferred the title of Freeman of the Borough for the first time since 1989, when Olympic Gold medallists Linford Christie and Andy Holmes were honoured.

And our newest Freeman was another sporting great, George Cohen MBE, part of the 1966 World Cup winning England team, but also a Fulham FC legend who played 459 times for the club during some of its best years.

George is a modest and charming man who still acts as an ambassador for the club.  Watched by his wife of 54 years, Daphne, he made a funny and moving speech to the Full Council and was presented with the award by Mayor Mercy Umeh last Wednesday. 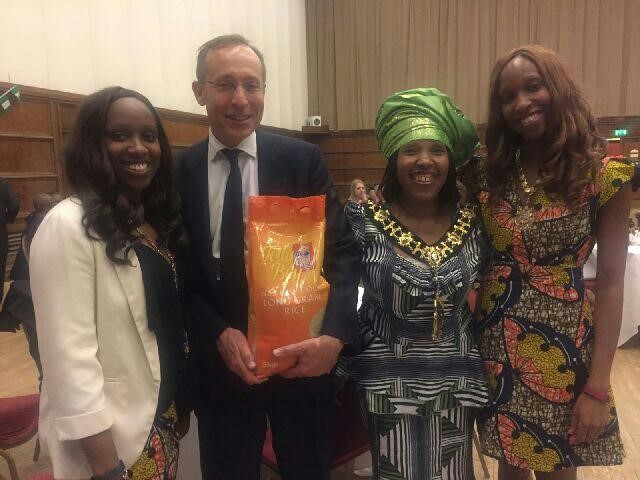 Mercy was in action again on Saturday, hosting a charity ball at the town hall to raise money for her sponsored charities, H&F Foodbank and H&F MIND. The Ball had a Nigerian theme to mark Independence Day and not only was I asked to toast the Queen and Commonwealth but for once won the raffle -; and claimed 5kg of fine Nigerian rice.

I also attended another special event, the Big Bad Tea Party in aid of Contact the Elderly,  held in St Pauls Church, Hammersmith.  250 people sat down for a Fortnum’s style tea and lavish entertainment. It was organised by a new community interest company, ABLE, to help raise awareness about loneliness among the elderly. 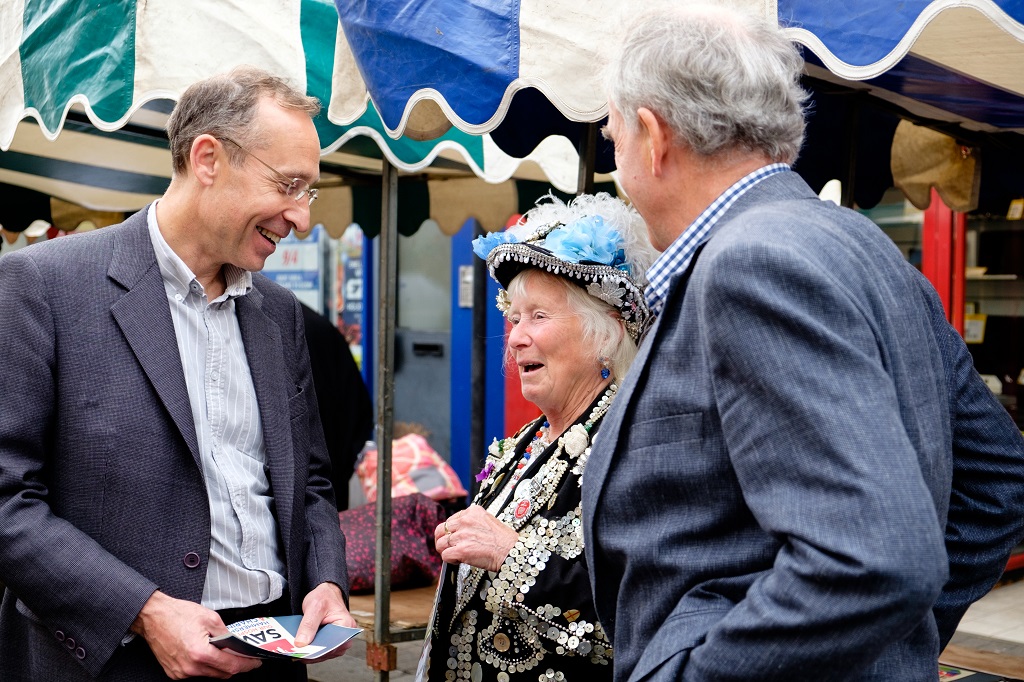 Once again, thanks to Fulham Broadway councillor Ben Coleman, North End Road Market went car free on 8 October -; with the result that 10,000 people enjoyed some relaxed shopping, with local campaign groups like the Save our Hospitals Campaign and the Hammersmith & Fulham Law Centre and Fulham’s Pearly Queen joining old and new traders.

Margravine Cemetery has been in the news after winning two prestigious awards in the London in Bloom competition. Credit goes to the Friends of Margravine Cemetery who make this one of our most attractive open spaces, especially at this time of year in full autumn colours.

It is AGM time so I h
ave been to speak at Avonmore Residents Association and West Ken and Gibbs Green.  Looking after very different areas, though only a few hundred yards apart, both have incredibly professional and dedicated officers, all volunteers.

The AGM of the Hammersmith & Fulham Historic Buildings Group was held at the old Citroen Garage by Little Brook Green, a beautiful early 20th century building which has been perfectly restored by local architect Roy Collado, who also renovated the Olympia Hall.

Lots of other speaking engagements, including to London Oratory’s politics society, and at the 20th anniversary conference for local dispute resolution charity Calm Mediation.

Rt Rev John Wilson, Bishop of Westminster -; and also of Lindisfarne -; opened the new Calder Building at Sacred Heart School, following a Mass and Blessing.  Combining laboratories and excellent new sports facilities this is a great addition to one of our most successful schools.

Palace Mansions in Olympia, invited me to the unveiling of a Blue Plaque to remember Joe Lyons, a one-time resident and the pioneer of mass catering.  The Lyons factory stood opposite until demolished in the 1980s.  Palace Mansions, like many of the charming blocks in the Avonmore Area is now owned by its residents who have just completed a stunning refurbishment.

I visited Notting Hill Housing’s extra care sheltered housing scheme at Elmgrove House, met the Student Union from Imperial College -; Imperial have over 2,000 students in the borough –  and toured the offices of the East European Resource Centre, a London-wide body based at POSK that is helping recent migrants with a range of issues, including hate crimes.

As an update on some of the bad news from last month, I have been pursuing the consumer affairs minister, Margot James, on recalling dangerous Whirlpool tumble dryers following the Shepherds Bush fire.  But I also got to meet Roscoe, one of the London Fire Brigade’s rescue dogs who attended the fire and was at the Commons to receive an Animal Action Award from IFAW. 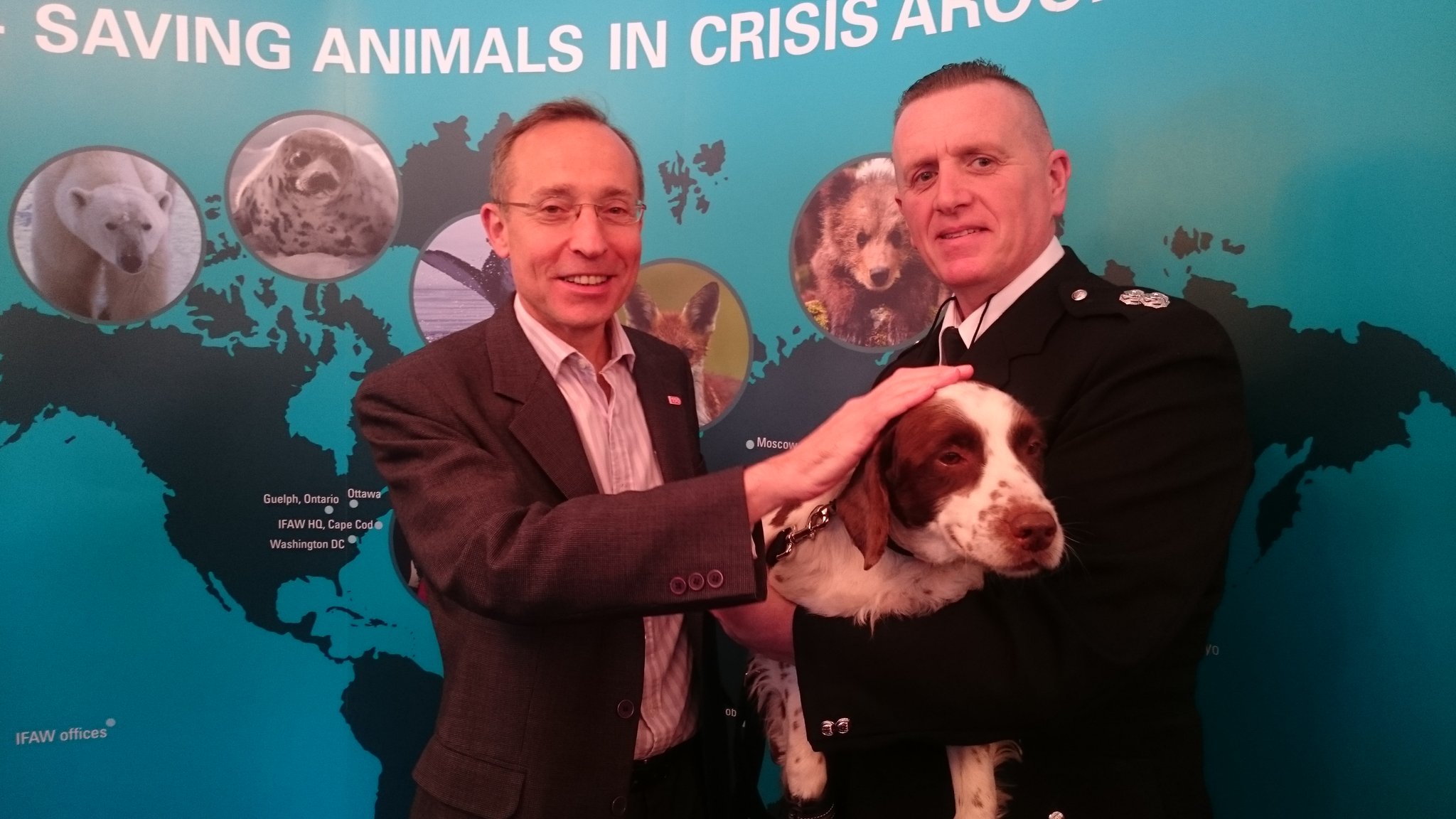 I have lobbied the Ministry of Justice about the proposed closure of Hammersmith Magistrates’ Court and put in my objection, and also given evidence to the Boundary Commission with an alternative to their mad scheme to split Hammersmith into three with bits of the current seat going to Brent and Ealing.

The Fulham Palace Road Post Office has been reprieved, though it is not clear for how long.

One of the borough’s kindest and most dynamic citizens, Adrian Norridge died recently. Deputy council leader in the 1970s, Adrian had a stellar career with Notting Hill and then St Pancras Housing Association, where he was chief executive.  Those were days, after Rachman, when working in housing could make a difference to many people’s lives. The class of 1971 -; which included ex-MPs Nick Raynsford and Clive Soley and former council leader Barrie Stead – gathered to remember Adrian at Oswald Stoll, another organisation he did so much to help.

A week later I accepted a new job -; or jobs – in the shadow government, as shadow minister for housing and shadow minister for London.  It is the example set by Adrian and his generation that inspires me to think we can still build affordable homes for Londoners and tackle the modern housing crisis.