Brexit, Trump and other disasters

I am a passionate pro-European, who worked hard for the Remain campaign last summer and still believe our prosperity, security, culture and values are strengthened by close relations with the rest of Europe, including through membership of the EU.

70% of the voters of Hammersmith voted to Remain.  I have always thought my first loyalty is to my constituents and thousands have lobbied me to vote against the trigger.  I also represent -; though they could not vote in the Referendum or General Election -; the 15% of Hammersmith residents who are citizens of other EU states, and who are being shamefully held as ransom by Theresa May’s Government.

The Referendum result was close -; we should not ignore the 48% who voted Remain any more than the 52% who voted to Leave.  Just as Governments -; and MPs -; represent everyone not just those who voted them in, so we should now be trying to find a way forward that (almost) everyone can live with.

But none of these is the reason I chose to vote against triggering Article 50.

Yes, the Referendum was a deeply flawed process with a narrow victory for one side, whose promises -; most infamously the £350 million a week for the NHS -; were abandoned as soon as the result came in. But no election is perfect, and issues of misrepresentation, turnout and size of mandate are often prayed in aid by the losing side.

The Supreme Court was right to give the decision on starting the exit process to Parliament rather than let Theresa May -; unelected as PM -; use medieval prerogative powers to make herself the sole arbiter.  But Parliament must have primary regard to the result of the Referendum, the purpose of which was to express the view of the British people on our membership of the EU.

What convinced me to vote against the trigger was the decision by Theresa May in her speech two weeks ago, repeated and expanded on since, that this would be not only the first but the final chance to influence not just whether but on what terms the UK left the EU.

I raised this issue with Theresa May at PMQs last week and her answer made it clear that she was not interested in consulting either Parliament or the British people on the final Brexit deal.

We are being asked to accept whatever deal Mrs May negotiates, with no alternative -; except no deal at all.  We cannot say, sorry that is a terrible deal, go back and try again.  Or, as a final step, if she really is incapable of safeguarding our future, putting the decision on whether to go through with Brexit back to the electorate.

This is not about re-running the Referendum of last June, it is about giving Parliament or the people a say in the future of the country.  It is the least we deserve.  Anything else is not just arrogant it is fundamentally undemocratic.

Forces on the right of politics, in the Conservative Party as well as UKIP and the far right, have long dreamed of rolling back the welfare state, employment rights and even the NHS. They also have a barely disguised distaste for the inclusive, tolerant and diverse society that places like Hammersmith and Shepherds Bush, indeed most of London, represent.  A hard Brexit, which is now the only Brexit on offer, is also about following this agenda.

These are not easy decisions, and the arguments do not all run one way.  When we debate the amendments to the Government’s plans next week, I will support those that give a real choice at the end of the process, and I will make my decision on future votes in the light of any concessions the Government makes.

Sadly, as I write, Mrs May, looks like she has surrendered to Farage just as she shamefully did to Trump on the refugee ban.

Trump leads Theresa by the hand -; and the nose

Approaching two million people have signed the petition asking Theresa May to postpone Donald Trump’s state visit until his racist and inflammatory ban on Muslims entering the US is lifted.

7,000 of those are Hammersmith residents, including me.  And tens of thousands took part in spontaneous demonstrations to oppose the ban.

There is no sign of Trump backing down despite much of the legal and political establishment in America, and political leaders across the world denouncing his Executive Order.

But the one foreign leader of influence who was in a position to persuade him of the grossness of his actions, Theresa May, failed to speak out.  The day before she met Trump she boasted to the House of Commons that their ‘special relationship’ allowed her to tell him unwelcome truths.  Yet at the first opportunity, she flunked it.

Trump, sadly, is the US President and the UK Government has to engage with him and his administration.  They do not have to offer the highest accolade of a State Visit, nor invite him to address both Houses of Parliament, following in Mandela and Obama’s shoes, while he is behaving like a demagogue.

As Shadow Housing Minister I have spent the last two months working on the Homelessness Reduction Bill, as it passed its House of Commons stages.  On Friday it did, with rare cross-Party support, and is now in the House of Lords.

This Bill places new duties on councils to prevent homelessness and to offer support to single homeless people. It could not be more needed: the number of rough sleepers has more than doubled since 2010, and this week saw a further 16% increase since last year.

When governments give new responsibilities to local councils, whose budgets have been cut by half under Cameron and May, they are supposed to fund them fully.  But the Minister has promised only £61 million over two years against councils’ estimate that it will cost £161 million for the first year in London alone.  And after two years there will be no money at all.

I extracted the promise of a review before the money runs out, and was pleased to hear the Minister read out the words I had drafted (opposition needs these small victories), but we’re under no illusion that the homelessness crisis is simply getting worse.

The government’s housing and welfare policies, such as the benefit cap, freezing housing benefit, and forcing the sale of empty council homes are major causes of homelessness.  So are short-term private tenancies and unrestrained rent increases.

Above all the failure to build affordable homes means the housing crisis will get worse, and homelessness is only the most obvious sign of a chronic problem that affects all ages and incomes.

889 people attended Charing Cross A&E in the second week of January. Only 60% were seen within four hours against a target of 95%.

Despite these desperate figures we also learned that the NHS in North West London are secretly planning to cut 8,000 jobs as part of the ‘Sustainability and Transformation Plan’ (STP). This is the same plan that would see Charing Cross and Ealing downgraded with the loss of hundreds of beds.

Our local NHS has never been under more stress, and it is at this moment t
hat the Chief Executive of Imperial NHS Trust, Tracey Batten, has chosen to step down from her role. She is returning to her native Australia, leaving behind the highest salary of any NHS Chief Executive, £340,000 a year.

Even this was not enough to persuade her to stay. And so the search is on yet again for someone to take on the impossible task of cutting or closing our local NHS services as demand grows and staff and patients alike struggle to make the system work.

The Government is planning to take money from schools in deprived urban areas and giving it to schools in, er, Tory constituencies. Hammersmith will be the eighth worst affected constituency in the country.

All 48 schools in the Borough will lose significant sums, with a loss of £2.8million across the Borough as a whole. Burlington Danes Academy alone will lose over £200,000. According to the National Union of Teachers that represents an average £796 per pupil per year.

I spoke in a Labour-sponsored debate on the subject last week.  And I would encourage everyone to contribute their views to the consultation being carried out by the Department for Education.

The councils seeking to challenge the Government decision to allow the Third Runway were told they must wait for their day in court this week.

But we always knew this would be a long haul and, as we await the publication any day now of the Government’s planning policy for the expansion, I was pleased to attend on Monday the launch of a new group set up by local residents https://handfnothirdrunway.org/.

We will campaign on air quality, safety, and congestion as well as noise.  But the biggest battle will be getting the critical mass of people living in now relatively quiet parts of Hammersmith and Shepherds Bush to realise what living directly under a flight path will mean.

One in ten Jobcentres nationally are facing closures, including Hammersmith, the busiest and most central in the borough.  As I pointed out to the Minister this week, coming on top of post office, court and police station closures this looks like a hollowing out of public services from our town centres.

We are lucky to have a thriving local economy compared to some parts of the UK, but we still have significant long-term and youth unemployment.  This requires dedicated support and matching of skills and training to jobs -; and that requires Jobcentres.  This was the reason I persuaded a previous government not to close the Shepherds Bush Office.  This time we are not even being consulted, just presented with a fait accompli. 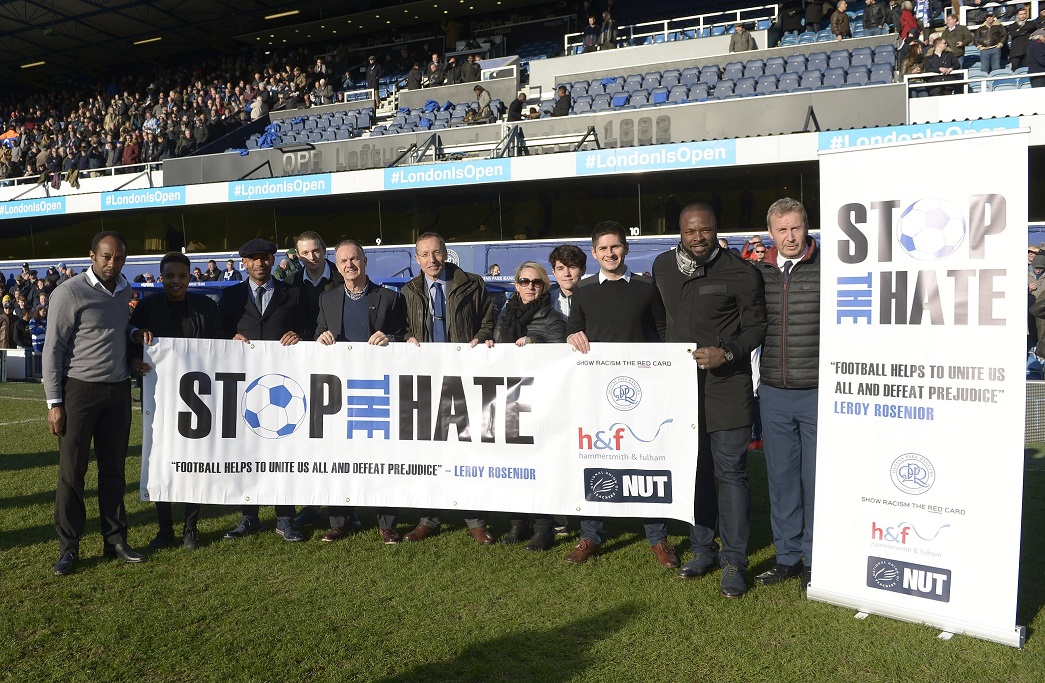 With Fulham riding high in the Championship and Chelsea getting planning approval for their new stadium, these are good times for our local clubs.

I am very proud to have QPR in the constituency, not least because their community work is second to none.  At the derby game against Fulham, QPR in the Community Trust launched their new campaign against hate crime which they are taking into local schools.

Developed with Show Racism the Red Card, the National Union of Teachers and H&F Council, it will educate children about the evil of hate crime, and challenge prejudice in all its forms.

QPR stood shoulder to shoulder with the Polish community following the post-referendum attack on the Polish Centre, they were the first London club to back Sadiq Khan’s #LondonisOpen campaign and they supported H&F council’s initiative to bring the abandoned Calais children to the UK.

These are a few examples among many of how our society and local community will maintain and promote decent values in an increasingly divided and hostile world.