Important consultations on the future of Hammersmith’s seat in Parliament, school funding and Heathrow

This is one of my interactive newsletters -; where I try to persuade you to respond to one, two or even three public consultations, which are important for our community here in Hammersmith and Shepherds Bush, and places far beyond.

Our schools are facing unprecedented cuts in funding which have led 47 of 49 head teachers in the borough to send this statement of concern to the Prime Minister and Secretary of State for Education.

A very selective consultation on the planned third runway at Heathrow refuses to confirm the new flight paths -; but I can tell you: they are directly over Hammersmith and Shepherds Bush.

And the Boundary Commission is asking for further comments on its proposal to abolish the Hammersmith constituency, which currently includes Shepherds Bush and North Fulham, and tag bits of it onto seats in Ealing and Brent.  Not surprisingly, I think this is a bad idea.

Even if you only have five minutes to write one or two sentences, your views will count.  I have provided links below to make it easy to respond online.

Remember, there is nothing governments like better than consultations to which no one replies.

Schools out -; of money 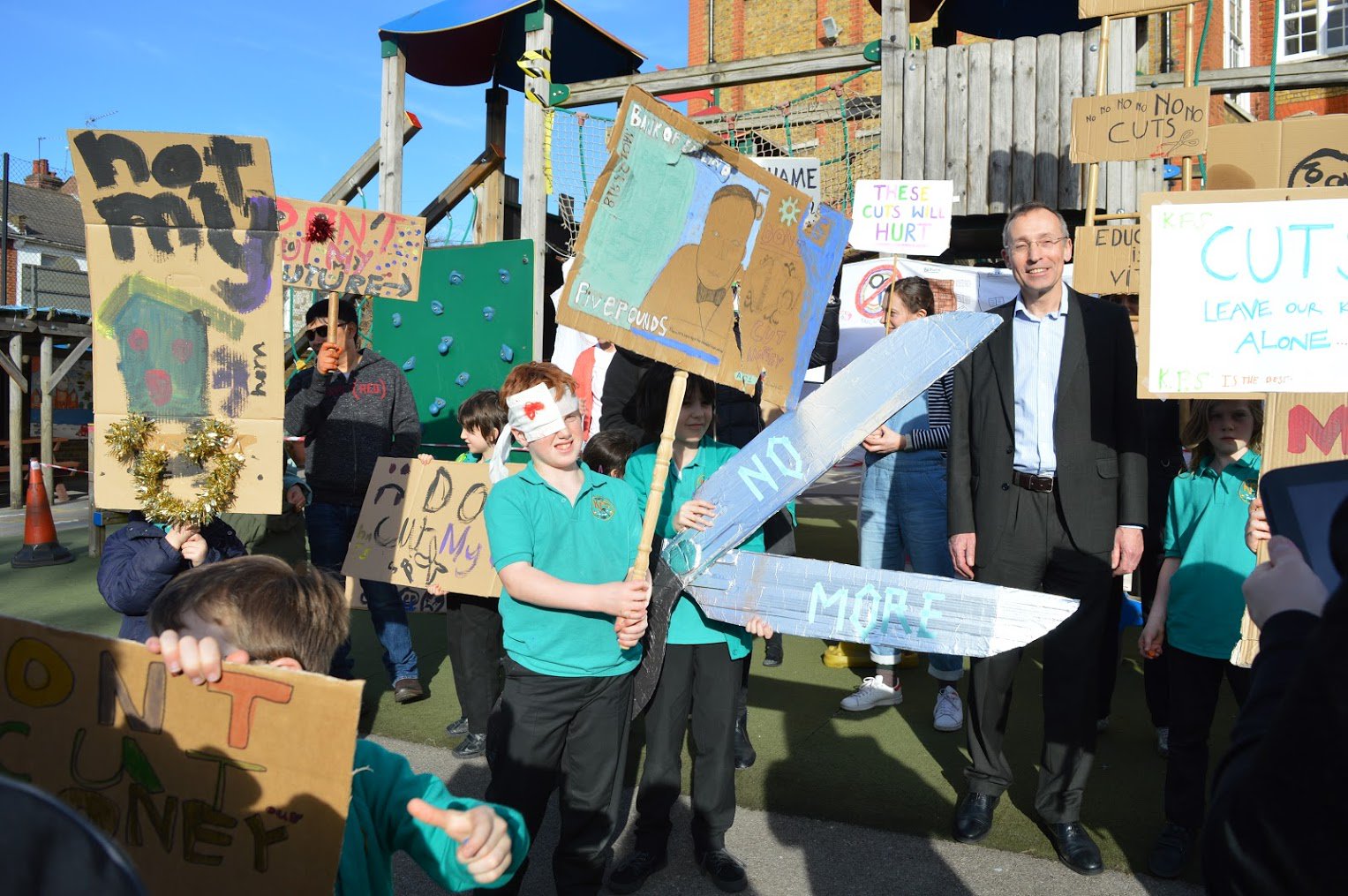 Believe it or not schools’ budgets have been going up by more than inflation for 40 years now -; a rare example of political consistency.  Of course they went up a lot under Labour and a bit under the Tories, but let’s not be grudging.  Until now.

The current Government, while making a manifesto pledge to protect school funding, is overseeing swingeing cuts.

You may have heard about the National Funding Formula -; this does not cut the total amount of money going into English schools but redistributes it.  In fact it redistributes it from inner-city, high-cost, deprived schools with mobile populations and many languages spoken to rural, more homogeneous ones with lower pupil turnover.

Inner London’s loss is Lincolnshire’s gain.  You can probably work out the politics of the respective areas too.

All H&F schools will loss the maximum 3%.  But this is just the start.

Because all schools will get less than 1% towards inflation against an estimated 8.7% over this Parliament (2015-20), 98% of schools, including most of those who win on the formula, will lose out overall.

Our schools have a double whammy and will lose at least 11% of their budgets.  In fact it’s a triple whammy as many schools were destined to lose even more money but are restricted to 3% formula cuts until 2020.  After that they would not get any increase for inflation until their budget had dropped to what the Government thinks they should be getting.

This could mean some schools see no increase for a total of 10 years or more.  And that means fewer teachers, books and extra-curricular activities.

So, whether you are a parent, grandparent, teacher or just a concerned local resident, please respond to the consultation and make these points. If it is easier just email your comments to Education Secretary Justine Greening at justine.greening.mp@parliament.uk or to the Department for Education at schoolsnationalfundingformula.CONSULTATION@education.gov.uk. But hurry, it closes on 22 March.

H&F Council is behind the campaign and held a meeting for 400 people two weeks ago.  And I have been touring schools to talk to parents about the cuts -; leading to some very animated responses like that at Kenmont Primary in College Park (pictured).

The Boundary Commission for England has been instructed by the Government to reduce the number and therefore change the boundaries of Parliamentary seats.

I have serious concerns about what is being proposed for Hammersmith -; which would see us split into three unequal and illogical parts.

If you currently live in the Shepherds Bush part of the Hammersmith seat, the Commission proposes moving you to new seats in Brent or Ealing.  Anyone living south of the Goldhawk Road and south side of Shepherds Bush Green will join another new seat that includes south Fulham.

College Park & Old Oak Ward, the area around Wormwood Scrubs, is, in terms of geography, economy, history and community ties, integrated into Hammersmith & Fulham. It would be placed in the new Willesden constituency, otherwise exclusively comprised of Brent wards.  The rest of Shepherds Bush would form part of an Ealing seat, stretching beyond Ealing Broadway.

I know many local residents share my concerns about these plans and responded to the Commission’s initial consultation.

These comments have now been made public, giving us a further opportunity to have our say before the Commission makes its final decision.

Here is my commentary on the responses so far, to give you an idea of the issues the commission will consider.  These must be about communities and geography rather than politics.

And here is my original counter proposal to the Commission which will keep Hammersmith & Shepherds Bush together and has a better solution for south Fulham and Chelsea too.

If you agree with me that Hammersmith should stay united, please comment here before 27 March., saying you support my proposal.

If you would prefer to respond by e-mail, you can write to information@boundarycommissionengland.gov.uk. Just be sure to quote reference BCE-29011 in your e-mail.

On 6 March, the Department for Transport took over the Assembly Hall at Hammersmith Town Hall to promote the plans for a Third Runway at Heathrow, with huge exhibition stands and numerous civil servants.  Outside, in the cold, a small table was staffed for the nine hours of consultation by local pressure group H&F No Third Runway.  But you would have learnt more at the table than the exhibition.

I spent an hour quizzing the DfT about pressure on public transport -; especially the Piccadilly Line and the M4 -; air quality and of course flight paths.  The first was challenging, I was told, the second was ‘trust us, we’ll get there in the end’, and the last was, well, a secret.

We will not be told the exact flight paths for five or six years, by which time Heathrow’s backers hope the new runway will be a done deal.  Instead they have noise contour maps which are staggeringly dishonest being based on so many assumptions, aggregations and contingencies that they bear no resemblance to the actual experience of west Londoners.

But we do know – from independent experts but also simple geography -; that Hammersmith and Shepherds Bush will be directly below the flight paths.  I cannot emphasise this enough.  Some residents have written to say the noise isn’t too bad. That, I politely point out, is because the runway hasn’t been built yet. If you want to know what it will be like go to Putney or Barnes when the wind is in the right (or wrong) direction.

There are many, many reasons why Heathro
w is the wrong place for major expansion of flights in the south east, not least because it already generates almost 30% of all airport noise nuisance in Europe, but here is some summary information you might want to include in your response, which you can make here.  And you have to 25 May this time.